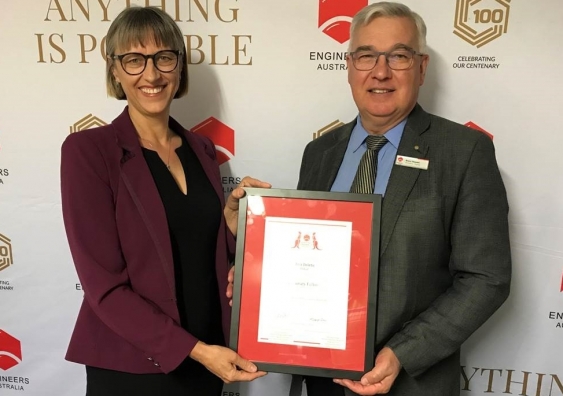 UNSW’s Pro Vice-Chancellor (Research) Professor Ana Deletic has been named an Honorary Fellow of Engineers Australia, for her exceptional contributions to the engineering profession and the Australian community.

Honorary Fellow is the highest membership of Engineers Australia and can only be awarded to and retained by 200 living members of the organisation. It’s an honour presented to distinguished people for conspicuous service to the Australian people or in recognition of outstanding achievement.

Professor Deletic is renowned for her research in sustainable urban water management. She is responsible for several “green” water solutions that have been adopted by cities in Australia and overseas, including the creation of an industry standard for stormwater biofilters. Also known as “raingardens”, these innovative garden beds filter and clean stormwater before it drains into waterways. The technology is used in Sydney, Melbourne, Singapore, Israel and China. More than 10,000 raingardens have been installed in Melbourne alone, to protect the lower Yarra from stormwater pollution.

Professor Deletic’s team is also responsible for developing blue-green walls, which are vertical gardens covering many modern high-rise buildings. The plants are irrigated with stormwater and household greywater instead of potable water from the tap, helping to conserve this valuable resource.

Professor Deletic believes engineering research can make an impact only if it is relevant to industry and positively impacts how we live.

“I believe that academics in engineering should be closely working with industry to advance their research agenda, as well as the profession.”

The UNSW professor is also known for her research in integrated urban water modelling, which helps to plan the use of green technologies in Water Sensitive Urban Designs (WSUDs). She has also produced modelling that’s used for flood planning and protection.

National President and Chair of Engineers Australia Trish White said Professor Deletic’s selection was not only due to her hugely relevant research, but her proven ability to foster collaborative relationships with industry in Australia and overseas, to develop strategies to improve urban water management.

“Professor Deletic’s ability to translate beneficial research into practice, in addition to leading a large research team and being responsible for the research strategy across UNSW, is truly remarkable,” Ms White said.

“Her contribution to the engineering profession and the community are exemplary, and she is well-deserving of an Honorary Fellowship of Engineers Australia.”

She is the recipient of numerous awards, including the 2012 Victoria Prize for Science & Innovation, and was also named one of Australia’s most innovative engineers by Engineers Australia’s create magazine in 2017.

Professor Deletic is grateful to everyone who has supported her throughout her career, thanking her teams past and present. “I would like to thank my 40 PhD students, many post docs and close colleagues for their hard work and support over the past 20 years.”