UNSW Sydney is mourning the death of Dr Michael Crouch AC, who made significant contributions to the University, including the establishment of the Michael Crouch Innovation Centre. 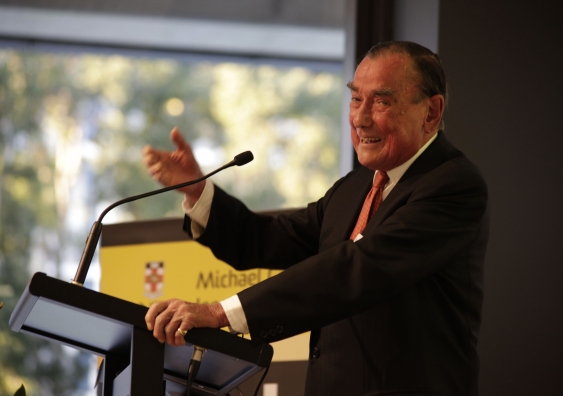 UNSW Sydney is mourning the death of Dr Michael Crouch AC, who made significant contributions to the University, including the establishment of the Michael Crouch Innovation Centre (MCIC) in 2015.

The distinguished Australian business leader and philanthropist, who was 84, was an enthusiastic supporter of entrepreneurship and donated generously to encourage innovation at the University. He has been a catalyst for UNSW’s success, and was inspiring in his quest to always “find a better way”. That was the ethos of the MCIC, established with the financial support of Dr Crouch and named in his honour.

At the launch of the MCIC, Dr Crouch said: “Innovation is what will make Australia great.” Since then, more than 30,000 users have benefited from the collaborative space, and many new student-led innovations have been born.

Innovation was at the heart of Zip Industries, which Dr Crouch turned into a global enterprise. Zip's over-sink boiling water systems have become a fixture of kitchens around the world, used by millions of people in about 70 countries.

Innovation also drove his belief in Australia's ability to design and manufacture products for export, and when he made his debut on the BRW Rich 200 List in 2014 he was lauded as “Australian manufacturing’s highest hope”.

Dr Crouch made significant contributions to the UNSW Business School, serving as a Director to the faculty’s Advisory Committee and as a Member of the Advisory Council from 2001-2012. In 2017, he received the first UNSW Honorary Doctorate of Business, in recognition of his extensive and sustained contribution to business.

In addition to supporting innovation, Dr Crouch was also passionate about initiatives around youth, medical research, arts and culture, as well as supporting industry in manufacturing, international trade, and education.

He was also outspoken about the need for a sharper public focus on Australia’s water resources and in 2017 he launched the late Colleen McCullough’s book Water is Life, which explores the role of water in human history and traces his career as an innovative Australian industrialist.

UNSW President and Vice-Chancellor Professor Ian Jacobs said Dr Crouch’s contribution to the University as a philanthropist, supporter and advisor had been exceptional.

“His work within the University and the wider community has been instrumental in securing a bright future for business and innovation in Australia,” Professor Jacobs said. “We are richer for his leadership and we are incredibly grateful for his gifts and his vision, which has enabled innovation to be firmly embedded in the heart of our campus and our community. He will be greatly missed.”

UNSW Chancellor David Gonski AC said: “It was a great pleasure to get to know Michael and work alongside him to achieve his vision for a more innovative Australia. We are incredibly honoured to have benefited from his inimitable support. It is a privilege that both his name and his great legacy of innovation will live on here at UNSW.”