Roger Covell took on many diverse roles during an extensive career in service of Australian music. 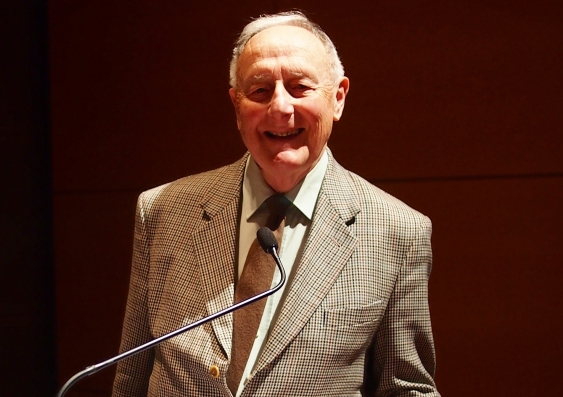 Far-reaching contribution to the musical life of Australia: Roger Covell.

UNSW Sydney has paid tribute to highly respected Emeritus Professor Roger Covell AM after his death at the age of 88.

Covell was an Emeritus Professor in the Faculty of Arts and Social Sciences. He was also a leading musicologist, author, performer, patron, visionary, and critic. His contribution to Australian music was immeasurable, including his professorship at UNSW, co-founding the Australia Ensemble, and decades of work as a music critic of The Sydney Morning Herald.

Professor Covell's achievements and honours were many, and contributions even more extensive. He established UNSW Opera in 1968, commissioned dozens of Australian works for opera and chamber ensemble performance, and championed works unknown to Sydney audiences.

Covell joined UNSW as a senior lecturer in 1966 to establish classical music programs on the University’s Kensington campus. He became Associate Professor in 1973, growing the School of Music and Music Education. He remained the foremost figure until his retirement from teaching in 1996, and retirement from the role of Artistic Chair of the Australia Ensemble in 2013. He was an energetic educator, and his 1967 scholarly book Australia’s Music: Themes of a New Society remained a principal resource for generations of musicologists and composers.

He was appointed as a Member of the Order of Australia in 1986 in recognition of service to music, awarded the Pascall Prize for Critical Writing in 1993, the Long-Term Contribution to the Advancement of Australian Music Award at the 2006 Classical Music Awards, and the Sir Bernard Heinze Memorial Award in 2013.

His legacy to Australian music and its musicians, musicologists and composers, however, is perhaps the greatest tribute to his extraordinary contribution.

“It would be hard to think of anybody else who has done so much and in the broadest scope for classical music in Sydney during the past 60 years or so,” said UNSW Professor Dorottya Fabian, Associate Dean, Faculty of Arts and Social Sciences.

“Those fortunate enough to have experienced Roger as an academic, colleague, critic, mentor and generous host have undoubtedly marvelled at his ability to bring vivid colour to language and enliven the musical life of Australia. We are forever indebted.”

UNSW and the Australia Ensemble extended their sympathies to Roger Covell’s family.