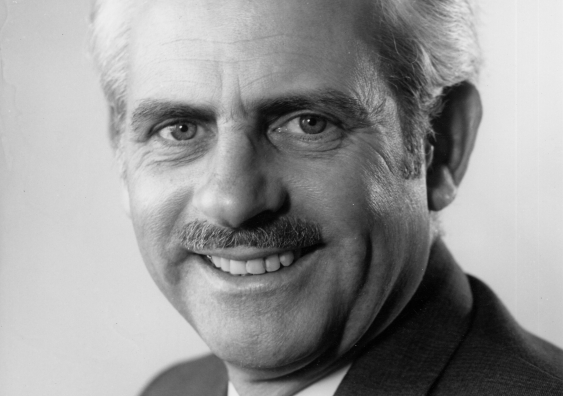 A materials scientist, academic and distinguished university administrator, Emeritus Professor Sir Rupert Myers was in 1948 one of the first two people to be awarded a PhD from an Australian university. As UNSW’s second Vice-Chancellor, he was instrumental in establishing the University’s character and presence in the academic world.

After developing processes for producing uranium powder and converting plutonium compounds into metal as a metallurgist in England, Sir Rupert joined UNSW in 1952 as the Foundation Chair of Metallurgy. In 1961 he became Pro Vice-Chancellor and then in 1969 he became Vice-Chancellor, continuing in that role until 1981.

The political climate of the 70s meant that Sir Rupert’s term was a colourful and vocal time for students on campus, and his strong moral leadership saw him engage meaningfully, generously and often with a sense of humour.

He was also just as willing to be a figure of fun in his interactions with students as he was to be a serious advocate for the University and its mission. His first day as Vice-Chancellor coincided with the inauguration of Prince Charles as Prince of Wales. As such, Sir Rupert allowed the students to inaugurate him as ‘Prince Rupert’ with a wheelchair throne and broom-handle sceptre, he was pushed among the student throng.

Sir Rupert’s formidable leadership paired with his warmth and down-to-earth nature garnered him deep respect from colleagues and students alike. As CEO and roving diplomat, he was recognised as the “essential consolidator”.

He was instrumental in establishing UNSW’s partnership with the Australian Defence Force Academy in Canberra, an achievement which gave him immense personal and professional satisfaction. Sir Rupert pushed to provide degree studies to uniformed officers because he believed in the benefits of a balanced and liberal education.

He was responsible for establishing the Faculty of Law, and the decision to locate Australia’s first national school of business administration, the AGSM, here at UNSW.

The political climate of the 70s meant that Sir Rupert’s term was a colourful and vocal time for students on campus, and his strong moral leadership saw him engage meaningfully.

The Chancellor, David Gonski, had a particularly special relationship with Sir Rupert.

“He was the Vice-Chancellor of UNSW when I was a student, and he impressed me from that day right through to the present. He was a wonderful, wonderful man,” said Mr Gonski.

“Sir Rupert was a renowned materials scientist and academic who will be deeply missed by the UNSW community. He led the University at a pivotal time in its history, one that was plagued with the student unrest of the 60s and 70s and a decline in funding. Sir Rupert’s calm and prepared nature ensured UNSW remained peaceful during these times.”

Throughout his illustrious career, Sir Rupert held numerous appointments and had been director or chairman of more than 20 boards and foundations, and president, councillor or member on at least another 12 occasions.

UNSW Sydney President and Vice-Chancellor Professor Ian Jacobs said: “I was fortunate to meet Sir Rupert on a number of occasions. He was always supportive, interested, charming and thoughtful. It was an inspiration to be able to meet a man who had such a big impact in the early years of UNSW.

“Our thoughts at this sad time are with Sir Rupert’s four children, Philippa, Gillian, Michele and Stuart and his second wife, Nancy.

“Many will also remember Sir Rupert’s first wife Io. They made a formidable partnership and promoted the University with enthusiasm.”

Family, friends and alumni are warmly invited to attend a Memorial Service to celebrate his outstanding life of service to Australia. This service will be held at the UNSW Sydney (Kensington Campus) in Leighton Hall, John Niland Scientia Building at 1pm on Monday 11 March 2019.

Employer of Choice for Women

Working together for students