Opinion ‘The disease of kings?’ 1 in 20 Australians get gout — here’s how to manage it

No longer just a disease of kings, the prevalence of gout is increasing around the world. 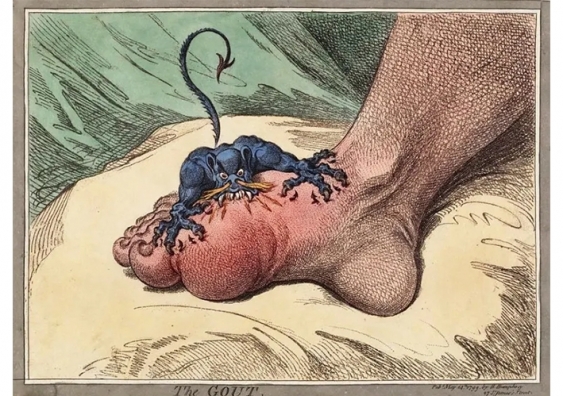 “The Gout”, by James Gillray. Wikimedia Commons, CC BY

I awoke one morning late last year to find a bright red bauble at the foot of my bed. It wouldn’t have looked amiss adorning a Christmas tree. But it felt ready to explode. It was my big toe, and this was my first encounter with gout.

With a history spanning more than 4500 years, gout is among our earliest recorded diseases. Hippocrates, traditionally regarded as the father of medicine, called it “the unwalkable disease”, because it was very painful for people with gout to walk.

Many famous historical figures suffered with gout, including Christopher Columbus, Henry VIII, Benjamin Franklin and Beethoven. It became known as “the disease of kings”.

This moniker also reflects the fact gout has historically been associated with indulging in rich food and excessive alcohol. Scientific evidence today suggests this may have something to do with it, though the common belief drinking port specifically causes gout is unfounded.

Today, no longer just a disease of kings, the prevalence of gout is increasing around the world. Almost one in 20 Australians have had at least one attack of gout.

And some stigma still clings to the condition. Often gout is seen as being self-inflicted, a mark of overindulgence. But living with gout has far-reaching implications, hampering a person’s ability to participate in everyday life.

Read more: Got gout? Here's what to eat and avoid

Gout is the most common form of inflammatory arthritis. It’s caused by sodium urate crystals forming in the joints. While the big toe is particularly susceptible, gout can also affect the ankles, knees, elbows, wrists and fingers.

Urate, or uric acid, is an end-product of the breakdown of biochemicals called purines, which are both components of your DNA and absorbed into the body through the foods you eat. Urate levels reflect how much is made in the liver and how much is flushed out when you go to the toilet.

If your urate levels become too high, the urate turns into crystals. When urate crystals form in the fluid cushioning a joint, the body’s defence forces see them as foreign invaders. Inflammation and debilitating pain follow. 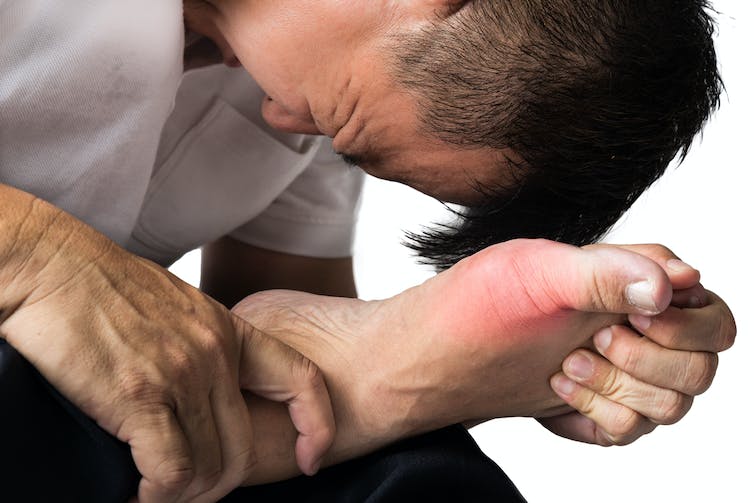 Gout can be incredibly painful. Shutterstock

A high level of urate in the blood is the greatest risk factor for gout. But what causes high levels of urate? While we don’t know exactly, several factors certainly contribute.

A tangled web links urate, gout and other metabolic diseases, including type 2 diabetes and high blood pressure. Being overweight is a common factor.

Gout is also more common in males — almost 80% of people with gout are male. One reason for this is the female sex hormone oestrogen lowers urate levels, and is therefore protective against gout in pre-menopausal women.

You should ice and raise the affected joint and minimise contact with it — even a light bedsheet can cause excruciating pain.

Attacks of gout can last for days or weeks. If you think you have gout, you should see your doctor.

Anti-inflammatory drugs can ease gout attacks. Your doctor might prescribe colchicine, or you can get ibuprofen over the counter.

It’s easy to stop exercising, but swimming and cycling are two ways you can comfortably continue moving during a gout flare.

If you suffer two or more attacks, management of chronic gout involves taking a urate-lowering therapy such as allopurinol or febuxostat. 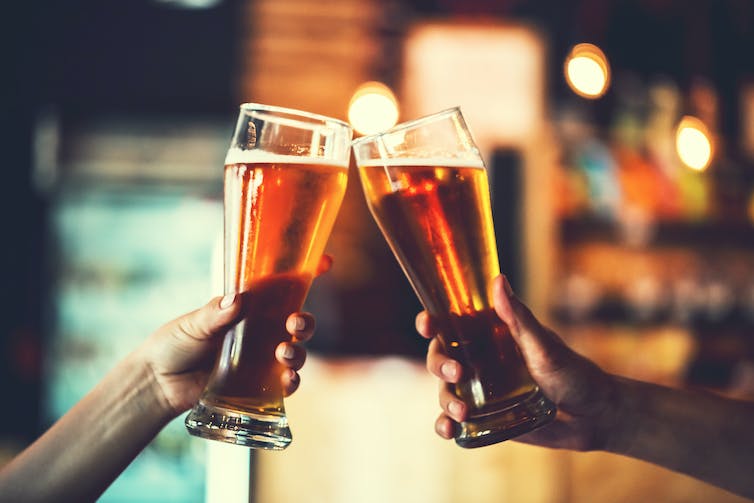 Beer is often singled out as it’s relatively purine-rich. But it’s a good idea to cut back on all types of alcohol. Shutterstock

If you’ve had gout once and want to prevent it coming back, it’s worth thinking about lifestyle changes. As with other metabolic diseases, losing weight helps.

You might also consider minimising consumption of purine-rich foods, which include meat, seafood and yeast products, like Vegemite.

But as with any diet, sticking to a low-purine diet can be challenging. Evidence for particular foods to favour or avoid for gout is weak, and overall, diet contributes very little to variation in urate levels.

So rather than purely focusing on purine-rich foods, consuming less in total can better control urate levels while improving your overall health. Limiting alcohol is also a good idea.

With a red bauble stuck on the end of your foot, you learn to appreciate how important your big toe is for mobility.

Eventually, I managed to drop my COVID kilos, by watching portion sizes, not going back for seconds, replacing unhealthy snacks with fruit, and cutting back on alcohol.

And with that, I’m hoping my first encounter with gout might be my last. Although keeping off the kilos will require constant vigilance, the memory of that painful red bauble should be a powerful motivator.