A study has outlined how two proteins are instrumental to bringing cholesterol into cells – a finding that has implications for a range of diseases. 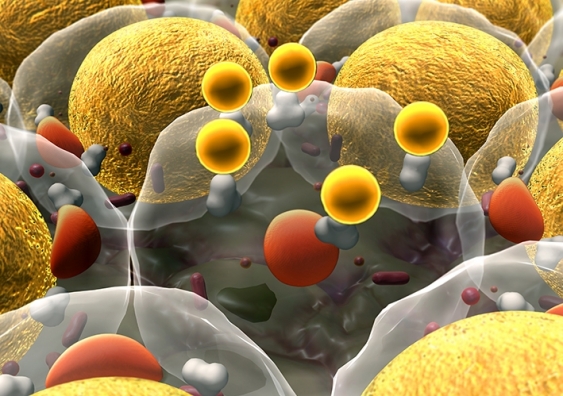 Artist's impression of cholesterol entering and being stored in human cells. Image: Shutterstock.

Scientists have shown for the first time how two proteins provide a tunnel for so-called bad cholesterol to enter our body cells.

The finding – conducted on cell lines in the lab – has implications for how we may develop future drugs for heart disease, a rare genetic disorder affecting children and even the Ebola virus.

In a paper published recently in the prestigious journal Cell, a team of researchers including molecular biologists from UNSW Sydney made a detailed analysis of the form and function of proteins encoded by two genes in humans – NPC1 and NPC2 – and analysed their role in transporting low-density lipoprotein (LDL) cholesterol into our body cells via lysosomes.

UNSW Science’s Professor Rob Yang says the international team of researchers, which involved scientists from Princeton University (New Jersey) and Tsinghua University (Beijing), used cryo-electron microscopes to observe proteins at the near-atomic level in great detail – something that was not possible just 10 years ago.

“Before 2013 we often had to theorise about how membrane proteins worked and how they functioned, but now we can actually see them, and seeing is believing.

“We were able to look at the NPC1 and NPC2 proteins and see exactly the role they play in transporting this LDL cholesterol into the cell,” Prof Yang says.

“If you imagine NPC2 bringing the cholesterol to the gate at the edge of the lysosome membrane, the NPC1 protein provides a tunnel for this cholesterol into the cell itself.

“Cholesterol is an important building block for our cells, but too much of it in the blood can clog our arteries leading to heart disease. Now that we understand how it gets into the cell, we can work towards developing drugs that target the NPC1 and NPC2 proteins to facilitate its influx into cells so as to lower the amount of it in the blood.”

A very serious and often fatal health problem associated with the NPC1 and -2 genes is the Niemann-Pick disease type C, often detected in young children. Mutations in the NPC1 gene can prevent LDL cholesterol from binding to the protein, leaving it trapped in the cell’s lysosomes. Over time, it builds up in cells causing cell dysfunction, and later, cell death. People with this condition experience symptoms related to progressive loss of function of nerves, the brain and other organs.

The research was partially funded by the Ara Parseghian Medical Research Fund, an organisation with a focus on finding new treatments for children with Niemann-Pick disease. Professor Yang  says with new detailed knowledge of the healthy functioning of the NPC1 and NPC2 genes, scientists could now start developing new techniques to help prolong the lives of children afflicted with the disorder down the track.

“By sequencing the genes of people suffering from this disease you can see where the mutation occurs and then develop targeted medicines that restore the protein’s ability to transport the cholesterol,” he says.

The lysosomes, which encapsulate cholesterol before releasing it into the cell’s plasma, also have a protective function against invading viruses. Studies have shown that the Ebola virus enters human cells after binding with the NPC1 protein. Professor Yang says this research may provide new insight into a strategy to stop Ebola in its tracks.

“Normally the acidic conditions in the lysosome break down foreign invaders,” he says. “But the Ebola virus latches on to the NPC1 protein and gets a free passage into the cell where it can then make lots of copies of itself and infect other cells.

“If we know this is the mechanism, we could develop drugs to block the Ebola virus from ‘shaking hands’ with the NPC1 protein, leaving the Ebola virus to be broken down by the lysosome’s acidic environment.”

Professor Yang says this same approach to target Ebola could have potential implications for developing treatment approaches for COVID-19, since it is also an RNA virus, and could potentially enter a body’s cells via NPC1.

The connection to COVID-19 is speculative at this stage, and Professor Yang says he would like to collaborate with other researchers in medicine to examine the possible relationship between NPC1 and COVID-19.

Last year he revealed the workings of another lipid transfer protein in animal cells called ORP2 that transports cholesterol – from inside the cell to the cell’s membrane.