13 drinks a session: risky teen drinkers drinking more than ever

The National Drug and Research Centre Annual Symposium will hear about research that finds the heaviest teen drinkers consume 11 to 15 drinks in one session. 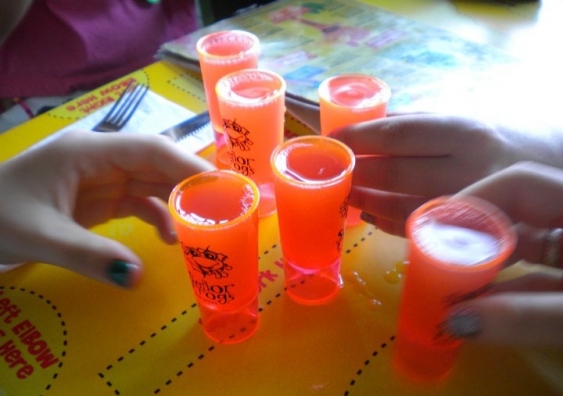 Fewer young people are drinking, but the one in five teenagers who are continuing to drink at risky levels appear to do so in higher quantities than their predecessors and experience significant harms, research to be presented at the National Drug and Research Centre Annual Symposium has found.

The survey of 3,500 of the heaviest drinking top quarter of 14- to 19-year-olds found they were drinking a median (middle point) of 13 standard drinks (15 for males and 11 for females) on a single occasion, and three-quarters had experienced a negative event, including one in five who had blacked out.

In another presentation, research from the sixth year of data from UNSW’s landmark parental supply of alcohol study has found that 17-year-olds given alcohol by their parents in the earlier years, even sips, were more likely to binge drink and show symptoms of dependence and alcohol use disorders than those who had not obtained alcohol from parents or other sources.

A third study on drinking and teens to be presented at the conference has found that teens who drank to cope with symptoms of anxiety and depression were twice as likely to progress to high risk drinking by age 21.

Research led by Professor Steve Allsop and Dr Tina Lam of Curtin University’s National Drug Research Institute surveyed 3,500 14- to 19-year-olds, who were the heaviest-drinking 25% of their age group.

The surveys were conducted face to face and online as part of the Young Australians Alcohol Reporting System (YAARS), a collaboration between Curtin University, UNSW Sydney and Turning Point in Melbourne.

"We have targeted this group because they are underrepresented in our national household surveys," said chief investigator Dr Tina Lam. "We know from other studies that rates of alcohol-related emergency department presentations in Australian teenagers is twice as high as for other Australians and far too many ambulance call outs for alcohol related incidents involve those under the age of 18."

"These heavy drinking sessions are the ones that are associated with the greatest harms – we wanted to know details such as exactly how much they were consuming, where they were drinking, where they obtained the alcohol and the range of harms they experienced," she said.

"When we asked about their most recent heavy drinking occasion, the median quantity was 15 standard drinks for males and for females 11, and they told us this was a fairly normal drinking session for them, and for most had occurred in the previous fortnight."

The researchers found that much of this drinking was on private premises and that most of those who took part in the study accessed alcohol from friends, but also from licensed bottle shops.

Nearly a quarter of the drinkers under the age of 18 said that the last time they tried to buy alcohol from the bottle shop, the purchase was "very easy" and took less than an hour.

When asked how they chose their drinks, taste was closely followed by price and strength.

But parents who think they might be helping their children by supplying alcohol and supervising sips and whole drinks for their younger teens are putting them at increased risk of binge drinking, says UNSW Professor Richard Mattick, NHMRC Principal Research Fellow at NDARC.

To reduce the risks of alcohol-related harms, parents should avoid supplying alcohol to children.

Professor Mattick and colleagues have been following nearly 2,000 children, and their parents, for the past six years, first recruited into the study at age 12 to 13. By age 17 to 18, any protective effects of parental supply have dissipated, data to be presented at the conference has shown.

"At around 17 years of age children who received alcohol from their parents were more likely to be binge drinking, experience alcohol-related harms and show symptoms of dependence," said Professor Mattick.

"These results contrast with the results we obtained when the children were 15-year olds when parental supply was associated with drinking but not with drinking to excess."

It seemed that the passage of time did not see moderation of consumption, but rather an increase in drinking problems, Professor Mattick said.

"There was no evidence to support the view that in the long term, when teens are on the cusp of adulthood, that parental supply is any way protective," he said. "Rather, to reduce the risks of alcohol related harms parents should avoid supplying alcohol to children."

Results of a collaboration between UNSW and the University of Bristol in the UK will be presented at the conference. The research analysed how alcohol use changes from adolescence to early adulthood using data from a UK birth cohort.

"We found that risky drinking was more common among young people with an anxiety disorder, and that teenagers who drank to cope with anxiety or depression were two times more likely to progress to higher risk drinking over the transition to adulthood," Dr Stapinski said.

"The next step for our team is to evaluate the impact of an online cognitive behavioural therapy (CBT) program for anxious young people, which aims to enhance anxiety coping skills, and prevent escalation of alcohol use."