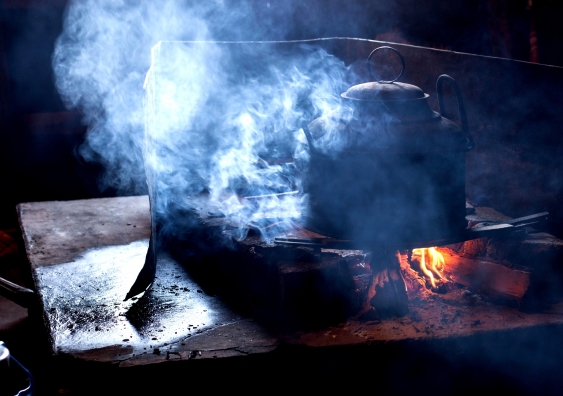 Residential energy use for cooking and heating are major sources of fine particles in China and India. Image: iStock

OPINION: Outdoor air pollution causes more than 3 million premature deaths a year, according to a study published today in Nature. The researchers, led by Jos Lelieveld of the Max Planck Institute for Chemistry in Mainz, Germany, estimated that in 2010, 3.15 million people worldwide died from exposure to airborne fine particles, with another 150,000 dying from ozone air pollution.

These deaths are in addition to the estimated 3.54 million deaths per year associated with indoor air pollution, mainly through the use of solid fuel for cooking and heating in non-industrialised countries.

Taken together, outdoor and indoor air pollution rivals cigarette smoking as a major risk factor for death and disability.

Much of this burden falls in Asia, particularly China and India. China is estimated to contribute 1.36 million of these deaths from outdoor air pollution, or about 40% of the total – a product of its high population and densely settled urban areas.

Fine particulate pollution – made up of particles less than 2.5 micrometres in diameter – comes from a wide range of sources, including traffic, industry, agriculture, diesel generators used for cooking and heating, and domestic biofuels such as animal dung or food waste, as well as natural sources such as dust storms and forest fires.

The predominant sources vary across the world. Whereas residential energy use for cooking and heating are major sources of fine particles in China and India, in the United States the greatest sources are road traffic, power generation and agriculture, and in Europe agriculture is the largest contributor.

The chief causes of deaths from particulate pollution exposure are stroke and heart disease. But it is also linked to deaths from chronic obstructive pulmonary disease (374,000 deaths worldwide, according to the new research), acute lower respiratory infections in young children (230,000 deaths), and lung cancer (161,000 deaths).

The health costs are enormous. In 2010, the cost of the health impact of air pollution in China was about US$1.4 trillion, and in India about US$500 billion.

Without action by governments across the world to curb this pollution, the researchers estimate that the rate of deaths will double by 2050.

The impact on Australia

Although the new research does not provide separate mortality estimates for Australia, a recent study of four major Australian cities (of which one of us (B.J.) was an author) estimated that air pollution in these cities has contributed to about 1,600 deaths a year.

The Nature study found that while air pollution from natural sources and bushfires affected large areas of Australia in 2010, the increased mortality from air pollution occurred largely in major urban areas such as Sydney and Melbourne. Sources of fine particle pollution in our cities include wood fire heating in winter, traffic, power generation (transported from other areas), and industry.

Of course, Australian cities have relatively low levels of air pollution compared with many of the world’s major urban areas. Air quality in Australia has improved over the past few decades and rarely exceeds the national air quality standards.

But this should not be a cause for complacency, as there is no accepted “safe” threshold below which fine particles do not cause health problems. Further improvements in air quality, even if within the national standards, will have beneficial health effects for everyone.

The OECD has put forward a range of regulatory and economic policies that could be used to reduce air pollution.

Clearly, different approaches will be required to tackle the various sources of fine particles in different regions of the world. For instance, in Asia and other regions of the world where there is a heavy reliance on biofuels for cooking and heating, cleaner affordable fuels are needed. Such programs are being rolled out in various countries but they require concerted effort, cultural acceptance and ongoing maintenance.

In regions where agriculture is a major contributor to fine particle pollution, policies will be needed to reduce the amount of dust these practices create. And for rich countries such as Australia, policies should drive continued reductions in traffic emissions, and cleaner energy generation.