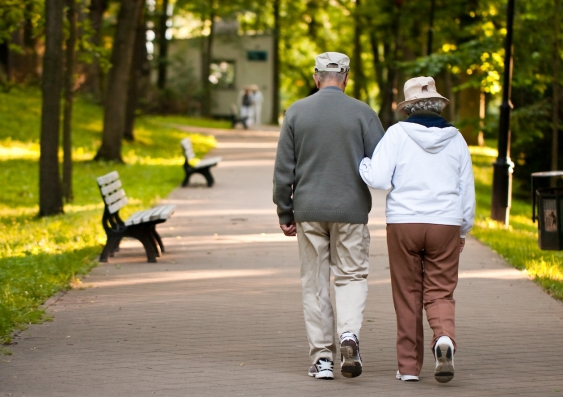 Participants aged 46 to 77 were instructed to wear a device on their dominant wrists for seven days. Photo: Shutterstock.

A new algorithm written by researchers from Neuroscience Research Australia (NeuRA) and UNSW Sydney could help promote health in older people and at-risk populations. By pairing with a wearable tech device such as a smart watch, the Watch Walk algorithm provides an accurate measurement of walking steadiness and speed and may be used in future to provide real-time feedback on how to improve individual walking stability to reduce the risk of falls.

Falls are one of the most significant health and economic issues in Australia, with around 30 per cent of adults over 65 experiencing at least one fall per year. In 2020, the treatment of injuries from falls in older people costs the economy $2.3 billion.

In a two-stage study, led by researchers at NeuRA and UNSW Medicine & Health and published in Scientific Reports, 101 participants aged between 19 and 81 wore a wrist sensor and were recorded performing specific movements in their homes in addition to walking and running in a lab setting. Researchers then used the data generated to create a digital gait biomarker algorithm that could measure gait quality with greater accuracy, using a combination of laboratory-assessed and real-world data.

In the study’s second stage, the validity of the digital gait biomarkers was tested on 78,822 participants from the UK Biobank database. Participants aged 46 to 77 years were instructed to wear a device on their dominant wrist for seven days and a total of 11,646 four-second recordings of movement were then classified into ‘Walking, Running, Stationary or Unspecified Arm’ activities. The Watch Walk algorithm was found to measure these activities with high precision (93 per cent; 98 per cent; 86 per cent; and 74 per cent respectively).

Digital gait biomarkers are quantitative measures of aspects of an individual’s gait, such as posture, cadence, walking speed and length of stride, that offer insights into overall health, functional decline and can often predict their likelihood to fall. However, a limitation of conventional digital gait biomarker measurements is they are typically geared towards walking on treadmills and set-length walkways and do not accurately assess gait from walking activities in real-world environments.

Lloyd Chan, PhD candidate at NeuRA and UNSW Medicine & Health and one of the lead authors of the paper, said this is the first time an algorithm for measuring gait quality has been widely tested in real-world environments and will be made commercially available.

“We know that the way people walk is a predictor of their health. For example, people who walk more slowly, infrequently, in smaller steps or for shorter distances are typically more likely to suffer a fall. Our goal was to capture this data through looking at how individuals naturally walk in their daily lives – and then test this broadly on over 70,000 individuals,” he said.

Watch Walk works by measuring gait with a smart watch’s in-built accelerometer – the same technology that makes the screen turn on when a smart phone or watch is moved.

“Our findings build on advances in wrist-worn accelerometer technology, which have previously been more limited to measurements of step count and sleep. As a measurement tool, Watch Walk has so many possibilities. Individuals can gain reliable feedback on their gait and track their improvement over time. In future, we hope to be able to analyse how people walk and predict their risk of disease or mortality,” Mr Chan said.

Professor Stephen Lord, Senior Principal Research Fellow at NeuRA and UNSW Medicine & Health, said, “The growth of wearable device technology in recent years has provided an accessible and approachable method of fall prevention in older people. Watch Walk demonstrates that this technology can also be highly accurate in real-world settings.”

A Watch Walk app is currently in development and slated for release in late 2023.