This Parkinson's Awareness Month, Darren shares his experience undergoing deep brain stimulation. What is it and how does it help PD patients? 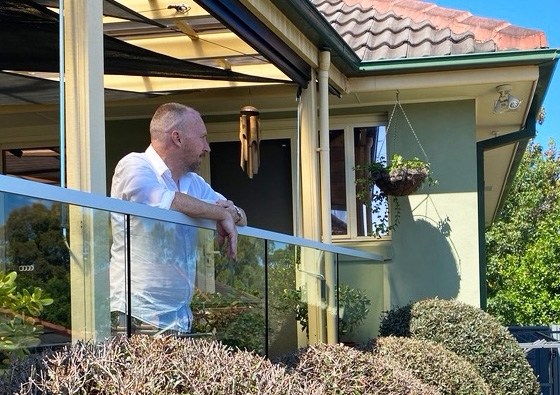 Last year, Darren Collins bravely shared his story about being diagnosed with young-onset Parkinson’s disease (PD) at the age of 44. This Parkinson’s Awareness Month, we revisit Darren’s story and talk to him about his decision to recently undergo deep brain stimulation (DBS) surgery.

“Since we last spoke in April last year, my PD symptoms did deteriorate, particularly the tremors in the right hand. If you can recall, I also had a peculiar gait that appeared like I was stepping over a log, also known as steppage gait. It was explained to me this was a result of an adverse reaction to medication as opposed to a symptom of PD,” says Mr Collins.

The steppage gait Mr Collins refers to is not a symptom of Parkinson's itself, but rather, a complication that can arise from some PD medications such as levodopa, however not everyone will develop this complication. These involuntary movements – referred to as dyskinesia – can be experienced by PD patients with long-term levodopa use, a medication used to treat the symptoms of PD. This can include involuntary movements of the face, arms, legs or trunk that are often fluid and can look like fidgeting, writhing, head bobbing or body swaying.

Mr Collins says he also developed shortness of breath, which he has noticed for the last 18 months. His treating neurologist suggested it was a 'wearing-off’ effect of the PD medication, which can present itself as shortness of breath.

In March 2022, Mr Collins underwent deep brain stimulation (DBS) surgery and is currently recovering from the operation. This type of surgery is not an option for everyone who lives with PD and there are generally accepted criteria for DBS candidacy.

Mr Collins explains the selection criteria and preparation for DBS is quite onerous and requires clearance from several specialists including a psychiatrist, a dentist, the neurosurgeon and of course the neurologist.

“DBS involves the insertion of fine electrodes into the brain to target a particular region on either side of the brain,” explains Perminder Sachdev, Scientia Professor of Neuropsychiatry at UNSW Sydney.

“The electrodes are placed in the brain using MRI-guided stereotaxy which offers great precision for each individual.  The electrodes are connected by fine wires placed under the skin to a battery-operated impulse generator – like a pacemaker – implanted in the chest wall,” says Prof. Sachev who is also Clinical Director of the Neuropsychiatric Institute at the Prince of Wales Hospital in Sydney.

He says the impulse generator delivers electrical impulses continuously to the brain regions that control some aspects of movement that have become disturbed in PD.  The brain regions most often targeted in PD are the subthalamic nucleus which helps to direct movement preparation, the internal part of the globus pallidus which helps regulate intended movement, or a part of the thalamus that relays and integrates sensory and motor function. The parameters of the electrical stimulation, such as the amplitude, frequency and width of the pulses can be controlled with a wand connected to a computer, which can also switch the device on and off. 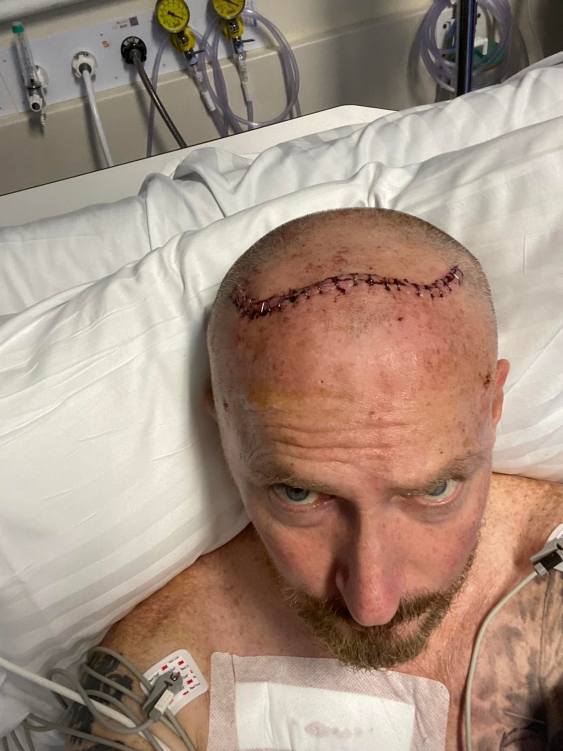 Mr Collins in hospital after the DBS surgery. Photo: Supplied

“Levodopa remains the first line treatment for PD. DBS is recommended for PD patients who have disabling symptoms, especially tremors, that are not helped by medication, or have developed treatment-related problems such as wearing-off spells or involuntary movements called dyskinesias, such as the ones developed by Mr Collins.

“The benefit can be seen immediately when the device is switched on, even while the patient is still on the operating table. The benefits of DBS last for several years. However, it is not a cure for PD, and does not prevent the progression of the disease,” explains Prof. Sachdev.

Mr Collins says, having only recently had DBS surgery, he has mixed feelings about the procedure.

“It is a daunting surgery which required me to be conscious for much of the procedure. It is certainly not something a candidate would undertake lightly or without the full knowledge of what will confront them in theatre, hence the reason the ‘build-up’ to the surgery is so long and detailed.

“My recollection of the procedure now is dominated by the discomfort – not pain – and fear of what was being felt and heard. It would be comforting to know the ‘halo’, which is the frame being screwed into the temples and behind the ears was not going to crush my skull because it was certainly what was going through my mind during the tightening of the frame.” 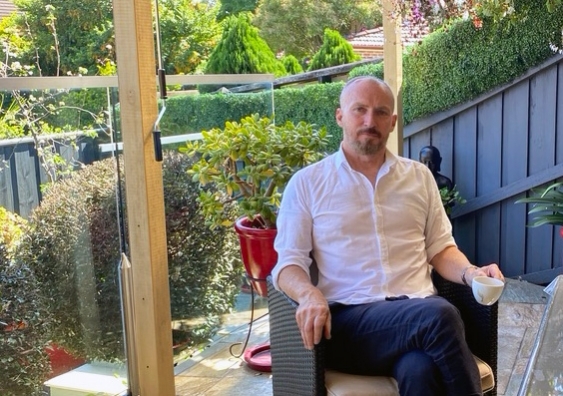 "I’m confident that when I return to the neurologist in the coming weeks I will have triumphed over technology and be comfortable with my new way of living.” Photo: Supplied

Mr Collins says the drilling into the skull was briefly loud and uncomfortable, but he was put at ease by the surgeon as he explained although it may feel like it wouldn’t, the drill would stop as soon as it penetrated the skull.

“Sitting at home recovering, I have some minor discomfort, but concerning me most are the tremors. They do not seem to have disappeared completely. This is most disheartening for my wife to have seen me go through the surgery and the preceding 18 months or so only to see the tremors worsen post-surgery. I suppose it's a case of managing the expectations for future patients but particularly their loved ones. I was informed by the team that it has a possibility to not be successful. In retrospect, I should’ve communicated that better to loved ones.

“Having said all that, the device is now implanted and operational and I am still learning to live with the implanted device and getting used to the maintenance of the batteries and manipulating the therapy to control my dyskinesias and tremors. I’m confident that when I return to the neurologist in the coming weeks I will have triumphed over technology and be comfortable with my new way of living.”

In March 2022, a UNSW Sydney-led consortium secured a $1.37 million grant to investigate a much-sought-after early diagnostic test for PD. Mr Collins says the funding is a major boon for the PD community.

“To be able to be definitively diagnosed early in the disease would surely enable the specialist teams to make better choices for the long-term management of PD. Being told you have PD is confronting and life changing but thinking or believing you have and not being able to positively say I do, is certainly much worse.”