Researchers from Sydney's Garvan Institute and the UK have developed a glow-in-the-dark 'biosensor mouse' that offers a real-time readout of the rapidly changing "skeleton" within cells. 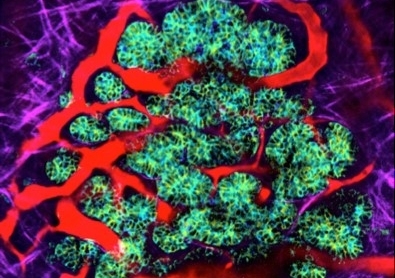 Researchers from Sydney's Garvan Institute of Medical Research and the UK have developed a glow-in-the-dark "biosensor mouse" that gives a real-time readout of the rapidly changing "skeleton" within cells.

Using sophisticated imaging technology, the researchers have watched as cells in the biosensor mouse respond dynamically to their surrounding environment in living tissues – including bone and the immune system – and as the cell’s skeleton is co-opted to drive breast and pancreatic cancers to spread.

"The biosensor mouse gives us unprecedented insight into how cells respond to the environment that surrounds them – both in normal tissues and in cancer," said the Garvan Institute's Associate Professor Paul Timpson, who co-led the study with Professor Kurt Anderson of the Francis Crick Institute, UK.

"Each of the cells in our body has its own tiny skeleton – and with the biosensor, we can see what that minuscule skeleton is doing inside individual cells in a living animal, and see how it responds and becomes addicted to its environment as diseases such as pancreatic cancer progress."

The mouse is the latest in a growing canon of groundbreaking biosensor mice developed by the Timpson and Anderson labs, including a biosensor mouse that makes it possible to watch in real time as pancreatic cancer cells prepare to spread beyond the primary tumour. The new biosensor mouse has just been published in the journal Cell Reports.

The mouse contains a fluorescent version of a protein called RhoA, which controls the shape of the cell’s skeleton. RhoA is thought be particularly important in "mechanosensing", the process by which cells remodel their own skeleton in response to the softness or rigidity of their surrounding environment.

For this reason, RhoA and its signalling pathway within cells is becoming an attractive new drug target in cancer.

"We’re particularly interested in RhoA because it gives us a readout of how cells reorganise themselves as their environment alters, and we know that the cell’s immediate environs are crucial in cancer, where a 'stiffer' tumour environment promotes growth and tumour spreading," Anderson said. "Biosensors such as this one also give us the ability to sense where and when drugs hit their targets, which is important for discovering new drugs.

"We also know that forces acting on the cell are crucial in normal tissue such as bone, where cells called osteocytes sense and respond to weight-bearing exercise."

RhoA oscillates rapidly between two states, active and inactive, in response to chemical and physical cues in the environment.

Using sophisticated intravital imaging technology, the researchers can watch where RhoA is, and measure how its activity changes, in any organ in the body.

Using the biosensor mouse, the researchers were able to explore the progression of breast cancer and pancreatic cancer in detail.

It's almost like a traffic light – the biosensor molecule is one colour when the cancer's been effectively attacked, and another if it hasn't.

"We’ve been able to watch RhoA through the entire process of pancreatic cancer – from early disease, right through to fully developed cancer and then to metastasis, when the cancer spreads beyond the pancreas to the liver," said Timson, a UNSW conjoint senior lecturer. "And what we see is that RhoA switches off and on depending on the organ or stage of disease – this knowledge could be key in helping to guide the timing of new drug schedules and interventions for this aggressive disease.

"We’ve also visualised the whole cycle of mammary development and watched how cells change during the progression of breast cancer."

The researchers went on to show that the activity of anticancer drugs could be readily assessed in the biosensor mouse.

"This technology allows us to monitor drug activity in cancers in living tissue. And the readout from the mouse is readily interpretable. It's almost like a traffic light – the biosensor molecule is one colour when the cancer's been effectively attacked, and another if it hasn't," Timson said.

Beyond the cancer findings, the research team investigated the activity of RhoA in a range of healthy tissues – including bone and the immune system. These studies were conducted in close collaboration with researchers in Garvan’s Bone Biology and Immunology Divisions.

"In the bone work in particular, we’ve seen things that have never been visualised before – deep inside the cells in living bone," Timpson said.

"We’ve been able to watch RhoA activity in the small protrusions that extend out from osteocytes (a type of bone cell), and to see what happens when a force is applied – just as it would be during weight-bearing exercise.

"Remarkably, we can see clear colour differences between protrusions that extend in different directions – so we think that the protrusions, through RhoA, are giving the cell feedback on which direction a force is coming from. We think that, in the future, the biosensor mouse could aid our understanding of how weight-bearing exercise could impact on osteoporosis and other bone disorders."

Timpson emphasised that the new biosensor mouse, and others created by the team, were available to researchers worldwide.

"I’m a firm believer that we all benefit when next-generation research tools are used by researchers in different specialties and different parts of the world," he said.

"There are already a number of groups worldwide that are driving new understanding of a range of cancers through these biosensor mice – and we’d love to work with others to advance understanding, and ultimately to uncover new therapeutic approaches to cancer."

A one-two punch for pancreatic cancer: ‘softening’ tumours before chemo

UNSW academics elected to Academy of Health and Medical Sciences