Clear messaging about who needs to get tested is better than stigmatising people who are understandably worried about their health. 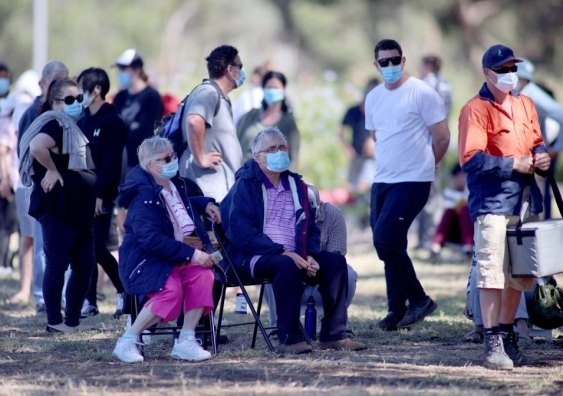 It’s been a big week for South Australia. First, the announcement of a six-day lockdown to limit the spread of COVID-19. Then today we heard this lockdown may have not been needed, after a man lied to contact tracers, prompting an early lifting of restrictions.

In between, South Australians have been waiting in queues for up to 10 hours for COVID-19 tests. And the state’s chief public health officer Nicola Spurrier warned the “worried well” not to clog up important public health services.

Labelling people anxious about COVID-19 the “worried well” isn’t helping, especially in a climate of uncertainty, as South Australia has experienced this week. It might also discourage people with mild symptoms to come forward.

So who are the “worried well”? And what should we really be doing to encourage the right people to get tested?

Who are the ‘worried well’?

The “worried well” is a term invented to describe apparently healthy people who think they might have a disease or medical problem, so see a doctor or have testing.

The term carries the whiff of a sneer, along with the implication such people are wasting health resources.

It shouldn’t be confused with hypochondria, which is chronic anxiety about your health to the level it may be considered a psychiatric illness.

The “worried well”, in contrast, are often responding to a situation that asks people to be paying special attention to an aspect of their health.

They might attend more regularly than required for cancer screening, for example. They are also more likely to believe it is important to take responsibility for their own health — a concept public health messaging actually reinforces.

Read more: How genetic testing is swelling the ranks of the 'worried well'

Dismissing people who seek medical attention for vague ailments or unsubstantiated risks as the “worried well” ignores the very real problem of the anxiety created by attention to particular illnesses.

Anxiety can cloud health perceptions and judgements, and prompt people to seek reassurance.

In the face of a global pandemic, where an invisible pathogen is transmitted often through pre-symptomatic or asymptomatic people, many of us are a bit anxious.

Vigilance can be useful for achieving compliance with the COVID-safe rules that have restructured our daily habits, such as physical distancing, avoiding touch and regularly washing our hands.

Anxiety is less useful if it results in people who have no known exposure and no COVID symptoms presenting for testing, particularly if there is a concern testing services may be stretched by demand.

However, applying a stigmatising label to such people is counterproductive.

Yes, it can be frustrating

In the context of an outbreak where there is urgent need to test people who have been exposed, and where testing capacity is being overwhelmed, reference to the “worried well” may be a symptom of public health officials’ understandable frustration.

It is, after all, a delicate balancing act to get everyone deemed at risk to test in a timely manner, without their ranks being swelled by those seeking reassurance who believe they were at risk but who have no clear or likely route of exposure.

But that doesn’t make the “worried well” a fair or useful label, and may work against achieving the widespread testing needed to control infection.

Read more: Why some people don't want to take a COVID-19 test

New South Wales and Victoria have promoted COVID testing as doing the “right thing”. Both emphasise people with COVID-like symptoms should be tested regardless of whether they have had a known exposure.

Similarly, the South Australian government is asking everyone with COVID-like symptoms to be tested, regardless of whether the symptoms are mild.

We have seen the dire consequences of people underestimating a sniffle, or mild respiratory illness, in the terrible tragedy of the Newmarch House aged-care cluster in New South Wales earlier this year.

The best way to ensure the right people get tested is by using very clear, consistent and targeted public health messaging.

Clear and consistent repetition of these groups is needed throughout relevant media, including the broadcast media, internet and social media.

Have the ‘worried well’ really clogged up testing?

It is not possible to assess how many of the more than 617,000 COVID tests conducted in the state so far met the criteria of credible risk according to the published criteria.

But if there is serious concern there is unnecessary testing, this needs to be swiftly addressed by explaining who needs testing and why. This needs to be repeated in multiple places, including being visible where people queue to test.

Clear and accessible pathways also need to be provided for people with COVID anxiety who don’t meet testing criteria, which the state government is beginning to address.

This is so people can be reassured in ways that do not involve unnecessary testing, and if necessary learn how they can address their concerns using the appropriate designated mental health services.