Busted myths: what spiders, chewing gum and haemorrhoids have in common

Which of the disturbing childhood tales told to us by our parents is true and what is myth? 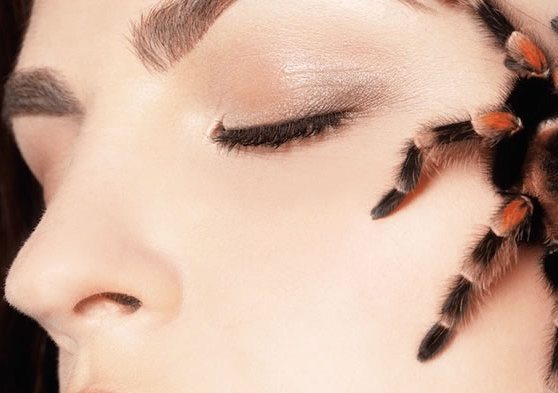 We swallow spiders in our sleep, don’t we? Photo: www.shutterstock.com.au

As children, we believed our friends and parents when they told us disturbing tales of watermelon seeds growing in our stomachs and changes in the wind freezing our pulled funny faces permanently. But which of these childhood tales is true and what is a myth? We asked three experts whether there’s any truth (or lesson to be learned) to the tales that kept us up at night.

Does sitting on cold concrete give you piles?

Haemorrhoids have been popularly conceptualised as “varicose veins” around the rectum and anus. This isn’t strictly true, though I have to admit I use this analogy with patients myself.

The underlying idea is that the small veins around the rectum and anus enlarge and balloon out. This happens from pressure in these vessels when the blood flow back to the heart is impaired.

The modern understanding of the pathological process is somewhat more complex. Regardless, haemorrhoids are often caused or triggered by abdominal straining.

Mostly commonly, this can happen when constipated or straining to pass hard motions at the toilet. Other causes include pregnancy, heavy manual labour, along with some hereditary or genetic factors.

So where does the myth that they can be caused by sitting on cold concrete come from?

It is possible these ideas arose and flourished from “sympathetic magic” conceptualisations of cause and effect. That is, “like causes like” after physical contact. Sitting on a cold stone surface is uncomfortable for your posterior – ergo, it can cause a condition that is experienced as an uncomfortable posterior.

Warts being caused by touching toads is another classic example. Neither, of course, is true.

Do we really swallow spiders in our sleep?

Maggie Hardy, Postdoctoral Research Fellow at The University of Queensland

I work with spiders for a living and, aside from what I’m sure would be the very rarest of occurrences, the idea that we eat them while we sleep is a myth.

Some spider species are known to “balloon” – a process where they release a thread of silk and float on the wind, ending up wherever it takes them. I suppose you could have one of these accidentally drift into your mouth while you’re asleep. But you’d have to be unlucky for that to happen.

But, generally, researchers think that while it’s possible we could swallow a spider while we sleep, it’s unlikely and would be a random event.

One American spider specialist, for instance, has outlined that five circumstances must collide for this unlikely event to happen.

3) It has to crawl across your body

4) It has to actually want to go into your mouth, and

5) You have to actually swallow it (we don’t automatically swallow everything that goes in our mouth).

So why is this myth so popular? A group of scientists found high levels of people’s disgust of spiders together with their phobia of coming into contact with them has led to our unrealistic expectation that we eat them unconsciously.

However, entomophagy (the human practice of eating insects as food) is becoming popular. Recently, the United Nations recommended eating insects as a sustainable food source, as they contain up to 65% protein with only a fraction of the calories of beef.

So I wouldn’t worry too much about eating spiders while you sleep. In the future, you may be eating insects and spiders on purpose anyway.

Does gum sit in your stomach years after you swallow it?

The answer to this urban myth is a resounding no. But, as with all good myths, there is an element of truth behind it.

Chewing gum, in all its various forms, has been around for a long time. Scientists have found lumps of birch bark tar with teeth marks dating back to the Stone Age. The Greeks chewed resin from the mastic tree and, in North America, spruce resin was chewed by Native Americans.

Modern gum products evolved from a natural gum, chicle, derived from the Sapodilla tree, which is indigenous to Central America.

Chewing gum survives the stomach’s acidic environment surprisingly intact. It is very resilient and not broken down by digestive enzymes. The normal propulsive waves of the gut, however, will eventually expel gum out of the body like other food materials.

Gum is normally surrounded by bile, pancreatic enzymes and other fluids and thus tends not to stick in the intestine.

But just because gum can pass through the digestive system doesn’t mean we should make a habit of swallowing it. Chronic massive consumption of gum can spell trouble.

One medical report described two young children who, as prolific gum chewers, swallowed a certain amount of gum. They developed chronic constipation and large rectal masses known as rectal “bezoars”, made up mainly of chewing gum.

Another report described an 18-year-old girl who was hospitalised because of persistent upper abdominal pain. She was in the habit of chewing and swallowing at least five wafers of chewing gum per day. A large gastric bezoar made up of chewing gum and food materials was pulled out of her stomach at gastroscopy.

As the saying goes, “moderation is best in all things”.