When it comes to seeking medical care after an animal bite, experts say to ‘make it snappy’ to avoid an infection that’s worse than the bite. 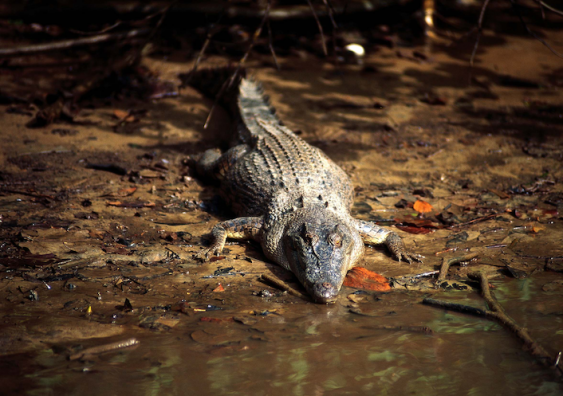 About half of all Australians will be bitten by an animal during their lifetime and animal bites often become infected. Photo: Department of Environment and Science

Snake, dog and cat bites were responsible for the majority of hospitalisations for animal bites in tropical Queensland, according to a new study conducted by Cairns Hospital and the Kirby Institute at UNSW Sydney.

But whether you’re bitten by a snake, crocodile, shark, wallaby, cat or a dog, simple, old-fashioned wound care and early medical review are the most important components of patient management.

The study, one of the largest studies of its kind, examined more than 1700 patients admitted to Cairns Hospital after an animal bite, sting or other related injury.

“About half of all Australians will be bitten by an animal during their lifetime and animal bites often become infected,” said Dr John Vardanega, an Infectious Diseases Registrar at the Princess Alexandra Hospital and the study’s first author.

Current Australian guidelines recommend antibiotics to prevent infection developing– but in locations like Far North Queensland, infections may be caused by unusual tropical pathogens, which may not be treated by first line antibiotics.

“An added complication is that in tropical Australia, many bites occur hundreds of kilometres from medical care. If we don’t get onto infections early, patients might lose a limb, or worse,” said Dr Vardanega.

The researchers wanted to increase our understanding of animal bites in tropical Australia, and to understand whether Australia’s current guidelines for antimicrobial care of wounds are suitable for tropical settings.

They found that a wide variety of animals were responsible for the hospitalisations, including snakes, sharks, crocodiles, bats, dingoes and even wallabies. Bites from domesticated animals like dogs and cats were also common.

Young men were over-represented in the cohort, which could be “explained by occupational exposure and a tendency for riskier behaviour”, Dr Vardanega said.

All the crocodile bites occurred in men while women were over three times more likely to be bitten by cats.

Dr Josh Hanson, a Senior Research Associate at the Kirby Institute, and an infectious disease physician at Cairns Hospital, said there were two broad categories of patients.

“The first group were people who had been bitten by a potentially venomous animal - such as a snake - or whose encounter had resulted in significant trauma. Over 96 per cent of these patients came to hospital within eight hours of the encounter. Most of these people didn’t need antibiotics, and very few developed a wound infection,” he said.

“The second group were people who presented over 24 hours after their encounter. Over 85 per cent of these people already had or subsequently developed a wound infection. These patients also had a higher chance of death, ICU admission, amputation and other complications, as the tissue damage complicating the bite was now irreversible”.

Dr Hanson said that perhaps surprisingly, cat bites were the most likely to become infected. “Victims often saw the wounds as trivial - even though cat bites can penetrate deep into the tissues - and almost 75 per cent of cat bites presented more than 24 hours after the injury, by which time infection was often established.”

Clinicians only identified 12 cases in which antibiotics recommended in national guidelines did not kill the isolated bacteria, and in none of these 12 cases was there a serious complication. All three deaths in the study resulted from snake envenomation while most other serious complications were linked to major tissue trauma.

“Our data suggests that antibiotics probably only have a limited role in preventing serious complications from animal bites. The key to good outcomes is for patients to present early for medical review,” said Dr Vardanega.

The best way to avoid infection is to not get bitten

Fellow researcher and Cairns Hospital infectious disease physician Dr Simon Smith said the hospital’s clinicians were highly skilled at treating patients who had a bad encounter with the Far North’s dangerous creatures, but there were simple steps people could take to reduce their chances of ending up in a hospital bed.

“If you encounter a snake in the wild or in your backyard, give it a wide berth, and let it go its own way.

“If you are concerned that it’s not moving on, please contact a local snake catcher or the Queensland Parks and Wildlife Service.

“If you are going for a dip at the beach, please follow the advice of Surf Life Savers and swim inside a marine stinger enclosure, or wear a full body lycra stinger suit. That will greatly reduce your chances of being stung by a box jellyfish or Irukandji jellyfish.

“And be aware that no waterway in northern Queensland can ever be considered crocodile-free, so always be crocwise in croc territory.

“And if you do get bitten, get medical care immediately. Make it snappy, not ‘in a while, crocodile’!”