The paleo diet is widely different from the food of our ancestors and its range demands scrutiny before it can be recommended for modern life, argues Rosemary Stanton. 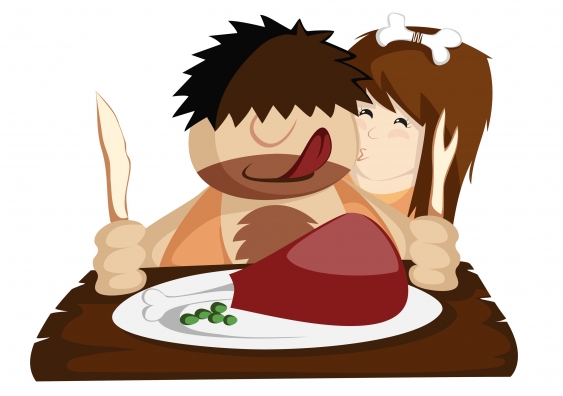 OPINION: Over the years, hundreds of diet books have claimed to have the perfect recipe for decreasing the national girth. They manipulate quantities of protein, fats or carbohydrates and most work in the short term because their inevitable restrictions cut energy intake.

But in the long term, few people can stick to most diets for more than a year or two. Indeed, the US National Weight Control Registry reports that only a fifth of those who intentionally lose at least 10% of their weight maintain the loss for at least a year.

Many popular diets are also nutritionally unsound and so their short lifespan is a blessing. Some, such as various paleo diets, however, are recommended for life and claim benefits beyond weight loss. Such diets demand closer scrutiny.

Defining a paleolithic diet is problematic. It’s supposed to be based on what our paleolithic ancestors ate.

Anthropologists have found very different dietary patterns, depending on where our ancestors lived. Most simply consumed what they could find with seasonal variations leading to substantial dietary changes.

From the mists of time?

The first of the popular paleo diets (dubbed the stone-age or caveman diet) was published in the 1970s by Walter Voegtlin, a gastroenterologist.

Although Voegtlin had published papers on various topics in his field during the 1940s and 1950s, by the 1970s he had come to believe humans should adopt a carnivorous diet because he considered our teeth and digestive tract were “more like a dog than a sheep”.

Before his death in 1975, Voegtlin published a diet book that recommended meat protein and fat, but no dairy products, no salt and minimal plant-based foods (especially grains and sugar).

In the late 1980s, Boyd Eaton published a somewhat different version of the paleo diet, based largely on the diet of our East African ancestors. It featured low saturated-fat content (in keeping with the flesh of wild animals) and a one-to-one ratio of energy from plant and animal foods.

This version of the paleo eating pattern supplied moderate amounts of carbohydrates from fruits, roots and shoots.

Eaton’s ideas have been amplified and publicised widely by Loren Cordain, an exercise physiologist from Colorado State University, whose website claims he is the founder of the paleo diet movement.

Cordain’s paleo diet is based on grass-fed meat, poultry, eggs and seafood, fruits and non-starchy vegetables. Fats are not restricted, but grains, legumes, potatoes, dairy products and sugar are all off the table.

This is supposedly due to their lack of grains, legumes, dairy products and potatoes. Oh for some proof!

Some notable experts have begun to speak out about paleo diet claims. Evolutionary biologist Marlene Zuk, from the University of California, has written a book titled Paleofantasy in which she debunks many myths about the paleo diet.

You can read about it on Scientific American or New Scientist. Or you can watch this.

Anthropologist Christina Warinner from the University of Oklahoma and the University of Zurich notes that most versions of the paleo diet are closer to an early 20th century affluent farmer’s diet than that of our paleolithic ancestors.

Here’s her recent TEDxOU talk about it.

Another anthropologist, Katherine Milton, claims that much of what has been ascribed to hunter-gatherer populations is inaccurate. Milton notes the very different dietary patterns among groups living in different parts of the world.

She has also documented the role that both animal and plant foods have played in human evolution.

Paleo diets recommend against the highly-processed foods rich in sugar, saturated fats and salt that characterise the modern Western diet; for this they deserve a tick.

But they ignore the benefits of many plant-based foods and some dairy products. You should check the evidence report of the Australian Dietary Guidelines for these.

Most importantly, however, the paleo diet pushes a pattern far removed from that of our ancestors. Even if domesticated animals are grass-fed, their flesh is unlike that of wild animals – kangaroo being the exception.

Free-range poultry don’t just forage but are fed grains, unlike wild birds. Wild-caught fish are an option, but there are simply not enough of them to go around. Around 70% of seafood consumed in Australia is also imported, often from countries where the diet of the local population desperately needs it.

Modern fruits and vegetables are also unlike those consumed in paleolithic times.

Paleo enthusiasts sometimes cite several relatively recent studies to justify their recommendations, but without exception, these are short-term and involve only small numbers of subjects. They do not constitute adequate proof of benefit or balance.

Those following the paleo diet could have low calcium and dietary fibre. Fruits, vegetables and nuts are the only sources of fibre, and calcium is found in almonds, seafood (especially prawn shells) and Asian vegetables.

Oxalic acid in vegetables such as spinach prevents absorption of its calcium and iron. Accurate nutrient levels in Australian foods are available here.

Remember too that processed meats and a weekly intake of more than 450 grams of red meat (including pork) increases the risk of colorectal cancer.

Rosemary Stanton is a Nutritionist and Visiting Fellow in the School of Medical Sciences, UNSW.

Why bad food is good for business

Is breakfast really the most important meal of the day?