Construction has begun on a new $76 million cancer treatment and research facility following a sod-turning ceremony at the Prince of Wales Hospital. 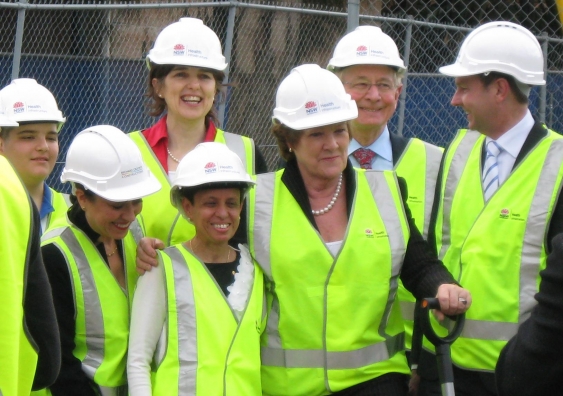 Construction has begun on a new $76 million cancer treatment and research facility following a sod-turning ceremony at the Prince of Wales Hospital.

The NSW Minister for Health and Medical Research, Jillian Skinner, and the Member for Coogee, Bruce Notley-Smith, broke ground on the site that will see modern facilities and state-of-the-art treatment and care delivered to cancer patients from across the state.

Comprising the Nelune Comprehensive Cancer Centre and the Australian Advanced Treatment Centre, the facility will bring ambulatory, outpatient and radiotherapy services currently spread across eight sites on the Randwick Hospitals Campus into one centralised building.

Named in honour of Nelune Rajapakse, the Nelune Comprehensive Cancer Centre will offer a patient-focused approach to the treatment of patients with cancer and blood disorders in one centralised location.

The Centre will provide services to more than 1,500 new patients each year and up to 5,000 inpatient cancer treatments, as well as delivering radiation oncology treatment to patients across the hospital campus and regional centres such as Tamworth, Bathurst and Canberra, Mrs Skinner said.

Additionally, it will offer a major teaching role in the training of oncologists, radiation therapists, physicists and nurses from throughout NSW, Mrs Skinner said.

The Head of UNSW’s Prince of Wales Clinical School and Director of Area Cancer Services for the South Eastern Sydney Local Health District, Professor Robyn Ward, said: “The UNSW Australian Advanced Treatment Centre will play a major role in the development and evaluation of a range of new therapies, including cancer treatments. The part this Centre will play in translating research discoveries into improved treatments in our hospitals is vital.”

The NSW Government has contributed $47 million towards the project, while $10.7 million has been set aside by The Prince of Wales Hospital Foundation, including $5 million from the Nelune Foundation. Funding has also come from the Federal Government and UNSW.

Work on the facility’s new radiotherapy bunkers is expected to be completed in March 2014, while the project’s second stage will be finalised in 2015.

Is the honeymoon over for personalised cancer medicine?