Opinion From COVID control to chaos – what now for Australia? Two pathways lie before us

The public has been left to their own devices as all our previous safeguards collapse around us. We urgently need a “vaccines-plus” strategy to flatten the curve. 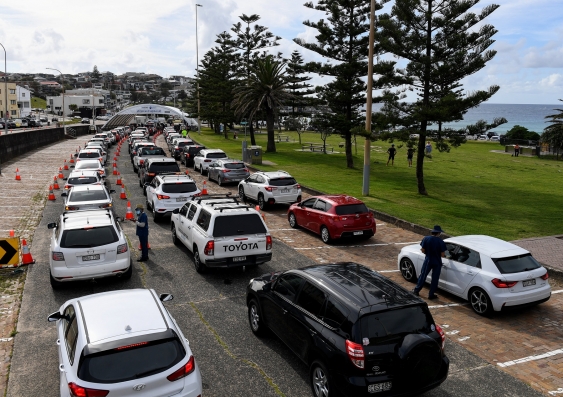 Australia has swung from one extreme in pandemic control to the other – having great control of COVID, to now having the world’s highest rise in daily cases.

Across the country (except for Western Australia), COVID cases are exploding.

True case numbers are much higher than official reports, as many sick people cannot even get a test or are only tested with a rapid antigen test, which isn’t counted in statistics.

Frail, ill and vulnerable people have queued for hours at testing centres, only to be turned away. Others find testing centres closed down without explanation.

Instead of rushing to expand capacity, state and federal governments restricted access to testing even more, by narrowing the definitions of who was eligible for a test and of what a close contact is.

State and federal governments have also pivoted to a strategy of using rapid antigen tests, as the traditional PCR testing system is overwhelmed. But these tests aren’t provided free, are exceedingly hard to come by, and there have been reports of price gouging.

Combined with vastly reduced contact tracing, this has toppled two pillars of epidemic control: test and trace. Modelling for the national plan assumed these would be still standing. Without these, it will get much worse.

The public has been left to their own devices as all our previous safeguards collapse around us.

We urgently need to change our approach and follow a “vaccines-plus” strategy to flatten the curve.

We can’t rely solely on vaccines

The New South Wales government persevered with the roadmap despite the emergence of Omicron and rising cases in early December – mask mandates were dropped and QR codes abolished.

By late December, cases predictably soared. With Christmas and New Year looming as superspreader events, NSW reintroduced QR codes and mask mandates, both highly effective and minimally intrusive. Then within weeks there was more flip-flopping about QR codes in what remained a chaotic response.

Meanwhile, people in Sydney cancelled restaurant and party bookings in droves for New Years Eve, leaving business and the economy worse off.

We’ve been told we have to live with COVID. In Queensland, the Chief Health Officer went as far as saying: “Not only is the spread of this virus inevitable, it is necessary (for COVID to become endemic).”

But COVID will never be endemic. It will always be an epidemic infection, with recurrent epidemic waves.

Every government health agency was informed by modelling that cases and hospitalisations would surge when mitigation measures were relaxed.

But there has been inadequate surge planning at all levels of government, leaving us sitting ducks with low third-dose vaccine coverage.

There was no planning for expedited third-dose boosters, expanded testing capacity, rapid antigen tests, hospital in the home, opening of schools or even guidance for people to protect their household when one person becomes infected.

During the Delta wave, hospital in the home was set up to spare hospital capacity, but this time people are on their own and must take “personal responsbility”, according to the Prime Minister.

The Omicron wave has made health systems buckle in most states, with NSW worst affected currently. Delta was twice as severe as previous variants, so if Omicron is 20-45 per cent less severe than Delta, that’s still no laughing matter with low booster rates.

Daily case numbers across Australia are already 30 times what they were in the Delta peak (and may be 200 times higher soon). The enormous volume of cases means the small proportion needing hospital care will overwhelm the system.

Hospitals are already so overwhelmed that in NSW, infected nurses are instructed to work. If you need to come into hospital for a heart attack or broken leg, the chances are you will catch COVID as a bonus.

“Collapse” of the health system means we move to disaster mode, where the standard of care we expect for any condition becomes compromised. Already, self-caring COVID patients are told to call their GP if they’re worried, with no easy access to the public health system.

General practice is struggling without any additional funding or support, withdrawal of some telehealth support, and the extra load of vaccination of children 5-11 years (from next week) and third dose boosters.

Several people died at home during the Delta wave. And there’s already a death at home of a 30 year old reported during the current wave. People dying at home is a measure of health system failure, and should be tracked.

There are also domino effects of mass illness on all parts of society. Supermarkets are unable to supply fully, because of the amount of illness all the way along the supply chain.

It could go one of two ways from here

If there’s no change in policy, there will be a higher, faster peak that far exceeds available health care, which may then force a lockdown. If people who need simple measures like oxygen cannot get a hospital bed, the death rate will start rising.

The other option is to use “vaccines-plus” to flatten the curve and ease the load on society and the health system.

Taking personal responsibility will be easier for the affluent, who can afford their own supplies, like rapid antigen tests.

For everyone else, some simple measures to prevent transmission in the home is to ensure safe indoor air, use KF94 masks which are much cheaper than N95s, and get your third dose booster as soon as you can.

It’s worth doing everything we can to prevent COVID and the long term burden of illness it may cause. In addition to long COVID, SARS-CoV-2 lingers in the heart, brain and many other organs long after the acute infection, and we don’t know the long term impacts of this.

Omicron isn’t the end – there will be new variants. There are promising new variant-proof vaccines on the horizon, so we shouldn’t surrender.