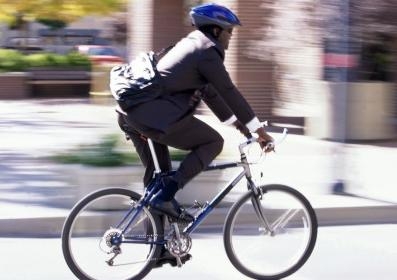 Most cyclists who use bicycles as a form of transport admit to breaking road rules at some time while riding but they do it mostly to guard their own safety on the roads, UNSW research has found.

Riding on the footpath and going through a red light are the most common infringements reported by cyclists, who were surveyed by UNSW and University of Sydney researchers as part of the Safer Cycling Study involving 2000 cyclists across New South Wales and led by Associate Professor Roslyn Poulos from the UNSW School of Public Health and Community Medicine.

Cyclists who rode for transport reported that they are primarily trying to protect themselves against the speed of cars and the behaviour of other road users, and are aiming to get to their destination in a safe and timely manner.

“The most frequently identified reasons for breaking road rules are associated with safety,” says researcher Louise Shaw, a PhD student at UNSW, and lead author of the paper published in the journal Injury Prevention.

“As vulnerable road users, cyclists are motivated to ensure their own safety by avoiding perceived danger from fast-moving vehicles in traffic and ensuring minimal conflict with drivers. The desire for comfort is also clear, with cyclists trying to save both time and energy,” Shaw says.

A total of 770 transport cyclists participated in this aspect of the study, in which the majority were experienced male riders with an average age of 42 years. Only 5.1% of them reported never breaking road rules while cycling.

The reasons they gave about why they broke the rules included:  the high speed differential between vehicles and bikes; the road being dangerous, busy, or too narrow; to avoid perceived impatience, frustration, or aggravation of drivers; and insufficient or poorly connected bike infrastructure.

“The study suggests cyclists are influenced by a road network that could benefit from more coherence and safety. Cyclists in this study commonly cited lack of infrastructure or poorly connecting infrastructure as influencing their decision to infringe road rules,” Associate Professor Poulos says.

“This suggests that modifications to the existing network are necessary and more bicycle-inclusive infrastructure is required for New South Wales.”

Should doctors refuse to work in immigration detention centres?