Opinion Don't panic, there's no need to ban bacon or BBQs (but you should eat less)

Our high ranking on the world scale for the prevalence of the cancer means Australians should take note of WHO warnings on eating red meat, writes Rosemary Stanton. 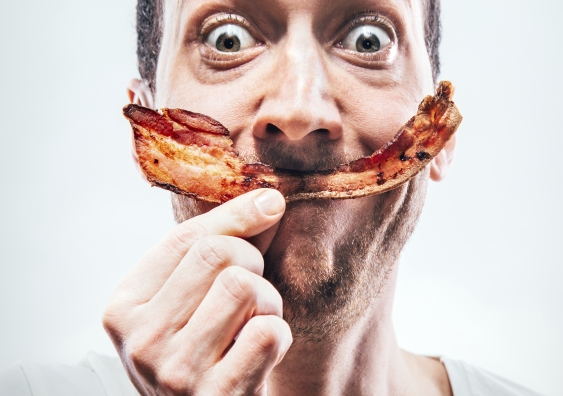 Don't panic, there's no need to ban bacon or barbecues - but you should eat less (iStock).

OPINION: It seems almost inevitable that every release of a major health report from an expert body unleashes a torrent of comment from those who think they know better than qualified scientists.

This week, that expert body is the World Health Organisation. Their latest report from 22 independent cancer experts from 10 countries evaluated more than 800 studies on red meat, processed meats and cancer.

The new report builds on previous reports from the World Cancer Research Fund with findings that large quantities of red meat are a probable risk for cancers of the bowel, prostate and pancreas. The evidence for processed meats has strengthened so that sausages, frankfurts, ham, bacon and other smoked or preserved meats are now classified as capable of causing cancer in humans.

It's highly relevant information for Australians with our high ranking on the world scale for colorectal cancer and the incidence showing no signs of abating. The Australian Institute of Health and Welfare expects more than 17,000 new cases of colorectal cancer to be diagnosed in 2015.

Some of those with a vested interest in marketing meat pour scorn on reports from health experts. It's not unexpected since no one welcomes publicity that might have adverse effects on sales of anything we consume.

The report has also inflamed some paleo dieters who won't hear a word against any kind of meat. Indeed, paleo enthusiasts consistently ignore warnings about the potential for increased risks of colorectal cancer from nutritionists who question the wisdom of pushing meat and banning legumes and grains which have proven protective properties.

Then some vegans enter the fray, which encourages many meat lovers to respond with claims that "we all have to die of something". That is obviously true but I suspect people would be understandably critical if someone they loved developed bowel or prostate cancer and then discovered that risk factors had been identified but not reported.

Some media reports suffer from cherry-picking as journalists may have neither the time nor the inclination to read the actual expert reports. If they did, they might be less inclined to dramatise and more likely to recognise context.

In the current report, WHO has put processed meats into Group 1: the agent is carcinogenic for humans. This means there is convincing evidence that the substance causes cancer and is a potential hazard, depending on the circumstances. In the case of processed meat, for example, the report notes that each 50g portion of processed meat eaten daily increases the risk of colorectal cancer by 18 per cent. It also notes that even though the overall risk of developing colorectal cancer may be small, that's a significant increase and particularly relevant for consideration as meat intake increases throughout the world.

Instead we've had media headlines, blogs and comments of outrage because Group 1 agents also include tobacco and alcohol. In fact, WHO explains clearly that this does NOT mean that all substances in Group 1 are equally dangerous. The classification system describes the strength of the scientific evidence about an agent being a cause of cancer but the actual risk depends on other factors. For processed meats, this includes the quantity consumed.

The Australian dietary guidelines took the findings of research and non-conflicted expert reports into account in setting a weekly limit of 450 grams on red meat and moving processed meats into the category of "discretionary" choices. Such foods can be avoided or consumed only occasionally in small quantities. No need to ban bacon or banish barbecues.

Dr Rosemary Stanton is a nutritionist and a visiting fellow in the School of Medical Sciences at UNSW.