We need to stop fussing over macronutrients and think about foods, writes Rosemary Stanton. 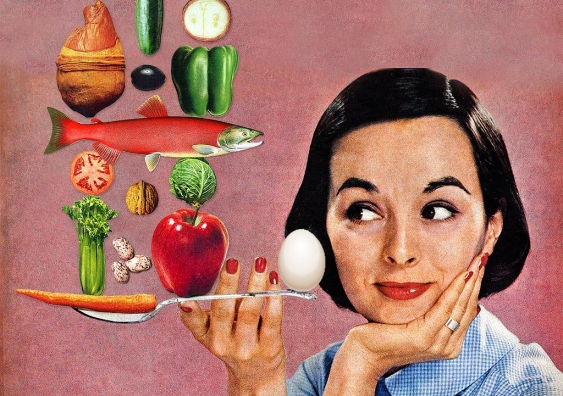 OPINION: There seems to be a shortening gap between studies about diet, nutrition and health. And each starts another conversation about trans vs saturated vs polyunsaturated fats, or this diet vs that, or, as is today’s case, fats vs carbohydrates.

In a paper published today in the journal Cell Metabolism, researchers found that when 30% of a day’s kilojoules were restricted by cutting fats (diets with a higher intake of carbohydrates), participants in their study lost more body fat compared to when the same amount of energy was restricted by cutting carbs (diets with a higher intake of fat).

This study used a type of meticulous metabolic research, which is expensive and unsuited to lengthy periods, but valuable for exploring the physiology of reducing equal dietary contributions from fat or carbohydrate. But like much dietary analysis, it may be shining a light on the wrong issues altogether.

The good, the bad and the ugly

The most important aspect of any diet is that it should be practical and healthy enough to follow for the rest of your life. There’s no magic bullet for weight loss. While some people claim they find it easier to cut out foods high in carbohydrates, others find it easier to avoid high-fat foods.

If you need to lose weight, cutting down is what helps. But few people can stick to any extreme diet for life, so what you substitute is just as important as what you cut out – especially for long-term health.

Choices based only on macronutrients (foods required in large amounts in the diet, such as fats, carbohydrates and protein) miss important aspects of many foods and open the diet to imbalance. Carbohydrate foods, for instance, include nutritionally worthy choices – such as legumes, wholegrains, fruits, milk and yoghurt – but also a huge range of items high in sugar or refined starches with little or no nutritional attributes. “Cutting carbs” doesn’t distinguish between the good and bad foods in this category.

The same thing happens with fats. Sources of unsaturated fat – such as nuts, seeds, avocado or extra virgin olive oil – have proven health benefits. But there’s no evidence for any benefits of lard, dripping, cream, fast foods or any of the fatty snack foods that account for much of our saturated fat intake. And no long-term study shows sustained weight loss or other health benefits from a diet high in saturated fats.

Some foods are more even problematic. Most fast foods are high in saturated fat and salt, and lack dietary fibre. And they’re not only largely devoid of vegetables (apart from the odd gherkin), but often displace meals that would have contained vegetables.

Biscuits, cakes, pastries, many desserts and confectionery provide a double whammy with high levels of unhealthy fats as well as sugar and refined starches. Make that a triple whammy because most lack any nutritional virtue as well.

From bad to worse

Assumptions based on macronutrients are simply too gross to be meaningful. This is apparent in so-called meta-analyses based on a mixture of cohort and case-control studies that use different methods and time frames relating to what people eat, and fail to report all aspects of the diet.

Worse still, such analyses are prone to many errors. A long check of every reference used in that meta-analysis showed that the conclusion would have differed if 25 studies had either not been omitted or had been reported correctly (sadly, it’s paywalled).

Hopefully, further research will distinguish between food sources of saturated fats; they are not all equal. There’s already good evidence that processed meats can have more deleterious effects than fresh meat. And that fermented dairy products, such as yoghurt and cheese, may also have health benefits and are distinctly different for heart health risk compared to butter.

Swapping saturated fat for sugar or refined starches is worse than useless for preventing cardiovascular disease. But please direct criticism of foods where fat has been replaced by sugar at the food industry. Dietary guidelines have always recommended limiting sugar as well as saturated fat.

A sorry state of affairs

Unfortunately, in most developed countries, sugar consumption remains high while intakes of vegetables, legumes, fruits, nuts and wholegrains are low. And while macronutrient intakes in countries such as Australia may look fine (31% of energy from fat and 44% from carbs), problems remain with the kinds and amounts of foods we consume.

Junk food and drinks were once consumed only as an occasional treat, but they now contribute significant portions of both adult and children’s diets – in Australia, 35% of adults' and 41% of childrens' energy intake. Confectionery and starchy, fatty, savoury snack food intake have also increased significantly.

It really is time to focus on foods instead of wasting time on macronutrients. Australia’s Dietary Guidelines have made this change, as has the new simple Swedish equivalent, which emphasises sustainable choices. Norway and 20 European countries also take a food focus and the number one point in Brazil’s enlightened guidelines is that diet is more than the intake of nutrients.

Consider the dozens of studies on Mediterranean diets, including randomised trials, where the fat and carbohydrate content vary but the health value depends on particular foods: extra virgin olive oil, nuts, vegetables, fruits, grains and legumes and a low intake of highly processed products. The take-home message from these is that we need to stop fussing over macronutrients and think about foods.

Rosemary Stanton is a nutritionist & Visiting Fellow at UNSW.