High-speed imaging techniques have revealed that a coordinated “zippering” up of expanding rings on the surface of developing embryos is a critical step in their healthy development. 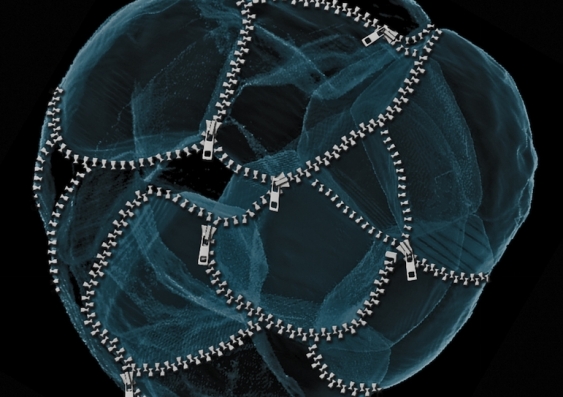 An artist's impression of how an early embryo is sealed up with coordinated zippering at the cellular junctions triggered by the coupling of neighbouring actin rings. Image:by Melanie White/A*STAR, Singapore

Scientists have discovered a process during mammalian embryonic development that is critical for early embryos to develop into healthy blastocysts.

Using advanced microscopy techniques and live mouse embryos, the researchers observed rings of actin – a main component of a cell’s cytoskeleton – forming on the surface of the embryo.

The expansion of the rings in one cell toward the junctions with neighbouring cells was essential for the subsequent sealing and healthy development of the embryo.

The study, jointly led by Dr Maté Biro of UNSW Medicine and Dr Nicolas Plachta of the Agency for Science, Technology and Research (A*STAR) in Singapore, is published in the journal Cell. 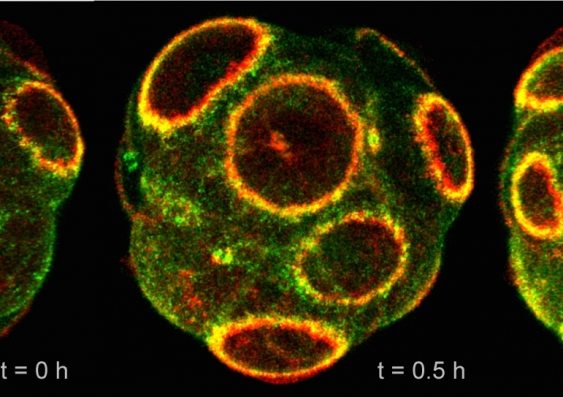 “We did not expect that this would be such a beautifully coordinated event across all of the outer cells of the embryo,” says Dr Biro, a researcher in the EMBL Australia Node in Single Molecule Science in the UNSW School of Medical Sciences.

“The coordination is what gives rise to sealing. If we disrupt the expansion of the rings, or zippering of the junctions, the embryo fails to seal properly or develop further.”

To transform from a loose aggregate of cells into a cohesive spherical tissue, the junctions between the outermost cells of the embryo need to be water-tight so that the embryo can expand by pumping fluid inside itself, creating an internal cavity.

Until now, it had been unclear what triggers the sealing of early embryos during this transitional phase.

Using high-speed imaging, the researchers were able to detect the assembly of the actin rings after the 8-cell stage embryo divides, and track the continued expansion of the rings until they reached the cell-cell junctions.

Components that generate tension were then recruited to the actin rings to tightly connect adjoining cells like a zipper.

Detection of these expanding actin rings has been elusive in the past due to technical limitations.

Dr Plachta and Dr Biro’s team were able to detect the dynamic actin rings, and uncover their fundamental importance in embryonic development, by using a combination of high-resolution imaging with advanced microscopes, fluorescent markers to label actin filaments, and analysis of the biophysical properties of the cells.

“This system is so complex. The key was to use an entirely intact model, and to image and probe it non-invasively, something the team members in Singapore are world leaders in,” says Dr Biro.