Children fighting a life-threatening form of cancer could be treated with a revolutionary anti-cancer therapy as early as next year, following the formation of a research alliance to fast-track development of a drug pioneered by UNSW researchers. 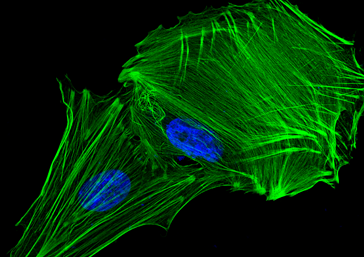 Children fighting a life-threatening form of cancer could be treated with a revolutionary anti-cancer therapy as early as next year, following the formation of a research alliance to fast-track development of a medicine pioneered by Australian researchers.

Currently there is no medicine approved to treat neuroblastoma, a cancer that affects up to 100 children in Australia and around 650 in the United States each year. Childhood cancers – which claim the lives of three Australian children every week – are currently treated with chemotherapies that have been developed for adults with little consideration to the special needs of children.

“For too long, childhood cancers have been neglected despite the progress made with treatments for adult cancers. The Alliance brings together the science, expertise and funding to accelerate the development of a medicine that has the potential to change the way we treat solid cancers in children,” said Professor Peter Gunning, Head of the Oncology Research Unit at UNSW Medicine.

The Alliance will progress clinical trials of a unique form of anti-cancer therapy originally developed by Professor Gunning’s UNSW research team and funded by The Kids’ Cancer Project. Now being taken forward commercially by Novogen, the drug class known as anti-tropomyosins has been specifically tailored to selectively target the structure of the cancer cell, causing it to collapse without adversely impacting healthy cells.

The Dean of UNSW Medicine Professor Peter Smith, who has worked as a childhood oncologist and is Chair of The Kids’ Cancer Project’s Research Advisory Committee said: “These drugs are very promising and long overdue. They have the potential to be the most significant development in the treatment of childhood cancer in more than 20 years”.

Novogen acquired the anti-tropomyosin technology in 2013 and has used its drug discovery expertise to produce molecules substantially more potent than those originally developed.

Novogen CEO, Dr Graham Kelly, said, “The Holy Grail of childhood cancer therapy is a medicine that is effective against a tumour such as neuroblastoma, but doesn’t leave the sort of damage that the child then has to deal with for the rest of their life”.

“We believe the anti-tropomyosins we have developed have the potency, selectivity and safety profile to meet the special needs of children,” he said.

Novogen is currently finalising pre-clinical research, with the goal of commencing clinical studies in Australia and the United States in 2015. The aim is that the childhood trials will be progressed in parallel with trials of anti-tropomyosins for a number of adult cancers.

Professor Timothy Cripe, Chief of Paediatric Haematology/Oncology/Blood and Marrow Transplantation at the Nationwide Children’s Hospital in Columbus, Ohio, affiliated with The Ohio State University, said, “Our research has shown anti-tropomyosins to be highly effective at killing neuroblastoma cells and slowing their growth in animal models”.

“The Nationwide Children’s Hospital is a major centre in the US for treating children with neuroblastoma. We are eager to test an idea that has been some years in the making,” he said.

NewSouth Innovations’ COO, Dr Jim Henderson said, “It’s important that the cutting-edge research at UNSW is made available in the community. We are enthusiastic that the Alliance will advance UNSW research into an exciting new treatment option for children with cancer”.

The Kids’ Cancer Project has supported the anti-tropomyosin research program since its beginnings in 1998, providing funding of $9 million to date. The charity also aims to raise a further $2.7 million to support clinical trials of the new medicine in children with neuroblastoma who have exhausted other treatment options.

Mr Col Reynolds OAM, Founder of The Kids’ Cancer Project, said: “Thanks to the generosity of our donors, we have been able to fund the initial research and proof-of-concept studies. The Alliance with Novogen and the other CODA partners now provides the means to progress to the clinical trial phase.”

Mr Reynolds said The Kids’ Cancer Project would continue to fundraise to ensure that the next phase of research into a treatment for neuroblastoma was not delayed. He highlighted that childhood cancers are second only to breast cancer in terms of the number of years of life lost to cancer in Australia.

“The Alliance would like to see other groups join the cause. We are keen to partner with anyone who can contribute to the development of improved treatment options for children with cancer.”

The clinical trials due to start next year are the first important step towards this treatment becoming available to patients on a general basis; the process of which is expected to take a number of years.