A doctor who worked at the Christmas Island detention centre has told a UNSW forum there has been “no adequate response” to a 92-page letter detailing concerns about asylum seekers' health. 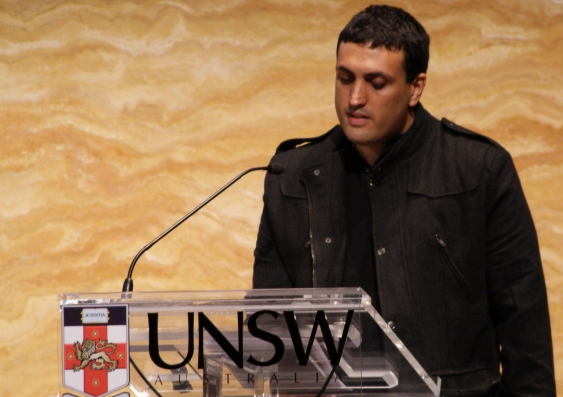 One of the doctors who worked at the Christmas Island detention centre has spoken at UNSW for the first time since co-authoring a 92-page letter of concern about asylum seekers' health, saying he feared speaking out.

Dr John-Paul Sanggaran told the audience at the Public Health, Human Rights and Asylum Seeker Detention Symposium that the letter, co-authored by 15 doctors, had been “largely ignored”.

“Despite over 18,000 words of detailed concerns there has been no adequate response. There is a single page we have received from the IHMS (the private medical provider in Australia’s detention centres) and I got to see a demo version of their new IT system.

“I in fact, have fears of repercussion because I have spoken out,” he says, describing a “culture of secrecy” which prevents “good people from raising their voices”.

Dr Sanggaran was one of three keynotes at the symposium and was acknowledged with a standing ovation.

The other keynotes were UNSW Law’s Dr Michael Grewcock and UNSW Conjoint Associate Professor Karen Zwi, who is one of the paediatricians appointed by the Australian Human Rights Commission to assist its Inquiry into Children in Immigration Detention. She spoke of children’s health problems including language delay, regression, depression and anxiety.

The event, co-hosted by UNSW’s School of Public Health and Community Medicine and the Public Health Association of Australia, concluded with attendees voting on a declaration calling for a range of measures, including the end of off-shore detention to uphold the right to health, which is part of international human rights law.