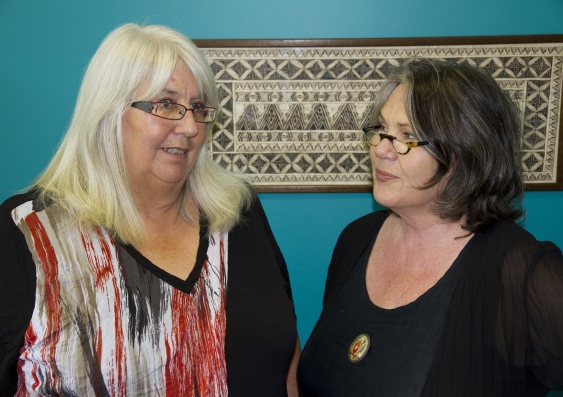 Heather Worth and Karen McMillan

OPINION: In Fiji times are hard for a single mum and Maria sells sex to help make ends meet. One Sunday night in March, she left her children at home with family and caught the bus into town. She was standing with a friend, when the military four-wheel-drive pulled up and soldiers ordered them into the back. The two women were driven to nearby military parade ground where they were forced to strip under the vehicle headlights. They were jeered at, and left huddled on the ground until morning when they were put to work scrubbing the barracks and then taken out to clean the streets. Maria feels lucky that she didn’t get ‘the cone’.

Maria’s detention is not an isolated incident and sex workers in Lautoka are well aware of the treatment meted out to transgender and women sex workers seized from streets at night. The innocuous traffic cone becomes an instrument of terror for sex workers who are made to wear them on their heads while doing high knee jumps, all the time pulling on their earlobes and calling out “I will not sell my body”.  The grotesque performance is more than cruel parody, it becomes torturous when captives are deprived of sleep and forced to repeat it throughout the night.

Since February 2010 numerous sex workers in Lautoka, Fiji, have been detained overnight and subjected to summary punishment - including humiliation, physical assault, sexual abuse and torture. These actions were heralded by the enactment of the Fiji Crimes Decree 2009, which replaced the previous Penal Code (and took effect in February 2010). That Decree, intended to update Fijian law, included a section called “Prostitution offences”. These offences criminalise a wider range of activities related to sex work and appear to provide wider powers to detain any person reasonably suspected of loitering with intent to sell sex. Under this section the purchaser of sex is now also criminalised.

The new and heightened fear of arrest and punishment has not deterred people from selling sex, however. Sex work in Fiji is driven by economic and social factors and cannot be legislated away. But fear has certainly changed the conditions under which sex is sold. Once characterised by cooperation, openness and a growing culture of advocacy, the sex worker community is in retreat. Sex work is becoming a more covert, isolated and dangerous activity. This is a major setback for a number of valuable, but fledgling, services and programs aimed at harm reduction during paid sex. Fear of the new military approach to policing sex work, along with insecurities about legal culpability, have had an impact on the few organisations that previously provided services and programs for sex workers.

The fear generated by the new laws has hindered HIV prevention efforts in other ways too. The introduction of the so-called ‘Swedish law’ criminalising the purchase of sex, has seriously undermined negotiating opportunities for sex workers, including those for condom use. Criminalisation of the client has increased client demand for young girls who are new to the game and are therefore not so readily identifiable. At the same time, it has marginalised more experienced workers who are aware of risks, insist on condom use, and educate both clients and other sex workers.

These undesirable consequences of the law change were surely unintended by those who drafted these ‘Prostitution offences’. Unfortunately, within the corridors of influence in Fiji, any recognition, or acknowledgement of the damage done is unlikely - as the consequences of the law change have effectively silenced sex workers. They are now, understandably, reluctant to speak out and are afraid to be publicly identified.

The real impacts of the law will not be reflected in court documents. Of the few cases that have passed through the courts since the law change, none have contested the charges and the evidential threshold has not yet been proven. However it is not the courts that are meting out punishment to sex workers.

Soldiers invoke the terms of the new Decree when they round up sex workers from the evening streets.  Punishment is summarily delivered and no charges are ever laid. Consequently there is no official record of these ‘arrests’. While the soldiers’ actions are technically illegal, those actions are motivated by the new ‘Prostitution offences’. The seizures of publicly identifiable sex workers from ‘prostitution hotspots’, as well as the aim of deterring sex work, have both been prompted by the revising of the law.

What happens in people’s everyday lives and practices is the most relevant measure of the effect of a law. Fiji’s new “Prostitution offences’ are simply bad law, having given rise to human rights abuses and damaged important HIV prevention capacities in the country. They must be repealed.

Karen McMillan and Associate Professor Heather Worth are researchers at UNSW’s International HIV Research Group. Their report, “Sex Workers and HIV Prevention in Fiji - after the Fiji Crimes Decree 2009”, was launched in Sydney today.

A version of this opinion piece first appeared in The Australian.