There are calls for the frail and elderly not be be overlooked for vaccines against pneumonia this winter, with UNSW research challenging conventional wisdom on immunisation effectiveness in older patients. 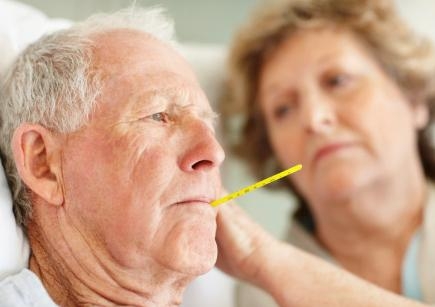 There are calls for the frail and elderly not be be overlooked for vaccines against pneumonia this winter, with UNSW research challenging conventional wisdom on immunisation effectiveness in older patients.

In a novel finding, the UNSW-led research demonstrated that even older, frail hospital patients with low baseline immunity are able to generate a significant response to pneumococcal vaccines.

Pneumonia is one of Australia’s leading causes of death, ranking in the top 20 in 2012 and is more common in winter. It is especially dangerous in young children and the elderly. In high-risk groups such as the hospitalised frail elderly, mortality is greater than 50 percent.

But a randomised controlled trial examining two different pneumococcal vaccines (23vPPV and PCV7) in frail hospitalised elderly found that both can elicit a robust reaction from those with low baseline immunity and there is a greater and more sustained response when the two vaccines are used together, in sequence.

“This study offers hope for novel combinations of the old and new vaccines for prevention of pneumococcal disease in this vulnerable group,” says Professor MacIntyre, the head of UNSW’s School of Public Health and Community Medicine.

The finding, published in PLoS One, is an important discovery given those with the lowest immunity are at greatest risk of developing invasive pneumococcal disease — the most common bacterial cause of pneumonia – and shows there is a case for vaccinating older patients.

As well as pneumonia, pneumococcal disease (an infection with the bacterium Streptococcus pneumoniae) can cause middle ear and sinus infections, meningitis and septicaemia. The majority of deaths occur in those aged 65 or older, and most cases are preventable by vaccination.

“Vaccination against preventable diseases is low-hanging fruit as a strategy for healthy ageing, and no elderly person should be denied vaccination simply because immunity wanes with age,” says Professor MacIntyre.

The study, A randomized clinical trial of the immunogenicity of 7-valent pneumococcal conjugate vaccine compared to 23-valent polysaccharide vaccine in frail, hospitalized elderly is authored by researchers at UNSW Australia, the National Centre for Immunization Research and Surveillance, Australia, the University of Sydney, Pfizer Vaccine Research, Westmead Clinical School, Westmead Hospital and the George Institute for Global Health. It was funded through an NHMRC Project Grant.