Researchers investigating 'the new frontier of medicine' and its defining effects on how we live and die are preparing to open a world class facility. 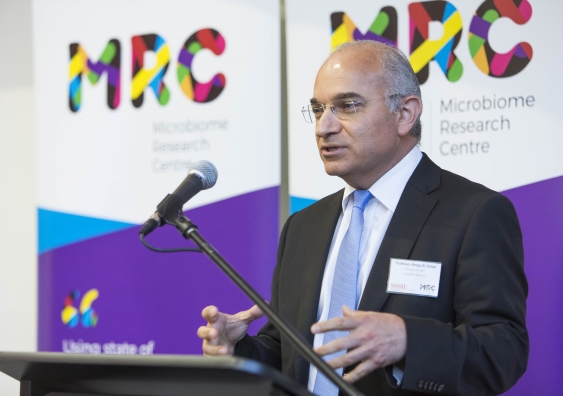 Emad El-Omar, Professor of Medicine at the St George and Sutherland Clinical School, UNSW Sydney, and the Director of the Microbiome Research Centre. Photo: Supplied

Research into the body’s gut bacteria and how it affects disease and long-term health has been given a funding boost, with the NSW government committing $1.5 million to the completion of the Microbiome Research Centre (MRC), based at St George Hospital.

The MRC is a collaboration between UNSW Sydney, the St George and Sutherland Medical Research Foundation and the South Eastern Sydney Local Health District.

UNSW Professor of Medicine Emad El-Omar, the director of the MRC, said the centre would bring together scientists and clinicians on one campus to support research programs to examine the microbiome’s impact on obesity, diabetes, foetal health, allergies and cancer.

“The microbiome is one of most important areas in medical research today,” said Professor El-Omar. “Unlike genetics, the microbiome is something we can change and manipulate. We need to understand gut bacteria and how imbalances occur in a much deeper way if we are to make further advances through clinical trials.

“By influencing and changing gut microbiota, the impact on metabolic conditions such as diabetes, allergy and obesity could be significant,” said Professor El-Omar. “We are also examining the role of the microbiome in cancer and its responsiveness to treatments and how a disrupted microbiome can have a significant impact on pregnancy and foetal outcomes.

“There will be unrivalled opportunities for the next generation of researchers in medicine and allied health specialities on offer at the centre. Their job is to diagnose what has previously been impossible to detect, and then to treat the conditions.”

The St George and Sutherland Medical Research Foundation received an initial funding grant in 2017 to help establish the centre and it will officially open in February 2019.

There will be unrivalled opportunities for the next generation of researchers in medicine and allied health specialities on offer at the centre. Their job is to diagnose what has previously been impossible to detect.

The general manager of St George Hospital, Leisa Rathborne, said the centre would be a world-class bio-informatics facility which would study specific bacteria, and translate those discoveries into effective treatments.

“Inside every one of us are trillions and trillions of bacteria and other microbes and each of these communities is known as a microbiome. Each person’s microbiome is as unique as a fingerprint and could hold the key to treating many conditions,” said Ms Rathborne.

“Dysfunctional microbiomes are associated with chronic diseases including cancer, obesity, diabetes, asthma, Alzheimer's as well as autoimmune diseases like multiple sclerosis and rheumatoid arthritis, and various neurodevelopment disorders like autism.”

“Microbiome research truly is the new frontier of medicine and this investment from the NSW government, along with the $1 million pledged by the South Eastern Sydney Local Health District and last year’s Commonwealth grant, will progress our work immeasurably,” said Ms Stratford.

Probiotics could be a key to cystic fibrosis outcomes