Jonathan Berengut's rapid-fire exploration of how we can control matter at the nanoscale wowed judges of the global Three Minute Thesis contest. 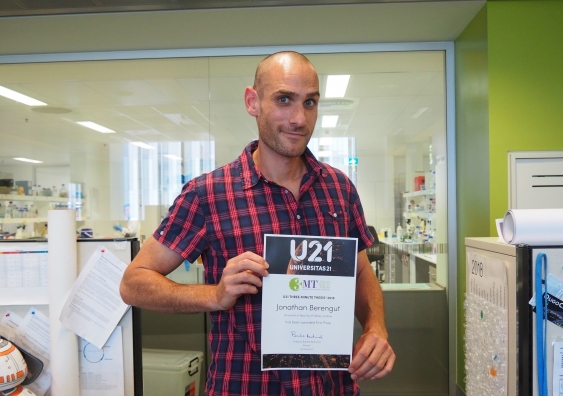 Jonathan Berengut from UNSW Sydney is the 2018 winner of the U21 3MT® (Three Minute Thesis) competition.

Mr Berengut won the global top prize with a presentation of his PhD thesis 'Bio-Nano Robo-Mofos', which includes a technique called ‘DNA origami’ to construct billions of nanoscale robots – each one thousands of times smaller than the thickness of a single hair – to accomplish complex molecular tasks.

“Although DNA origami nanobots like the ones I build have been used for many things such as cancer drug delivery, nanoelectronics and biosensing, I see what I do as fundamental research. It adds to our understanding of how we can control matter at the nanoscale,” Mr Berengut explained. “And that’s the kind of thing that will lead to new materials and medicines.”

The Universitas 21 3MT competition brings together the very best doctoral students from around the world to present their thesis in a three-minute video. At the UNSW 3MT event in September, Mr Berengut won the trifecta: first prize, the People’s Choice award and the ASPIRE prize. He said going on to win the global prize was an extra honour.

“I’m stoked to have won the U21 3MT final. I saw the other U21 3MT videos, and to be put in the same category as them is pretty amazing, let alone to win it,” he said.

The runner up is Phoebe Kirkwood from the University of Edinburgh, Deanery of Clinical Sciences. Her thesis, 'The Secrets of Scarless Healing', studies the scar-free wound healing event that takes place in the endometrium following menstruation with a view to applying this knowledge to other tissue systems that largely undergo fibrosis in response to injury that causes irreversible damage.

The 2018 People’s Choice winner is Roshaida Abdul Wahab from University College Dublin, Institute of Food and Health. Her research, 'The Truth, the Whole Truth and Nothing but the Truth', focuses on dietary biomarkers, a new method of capturing people’s dietary intake using a metabolomics approach. These biomarkers offer a more objective measure of people's diet and could have a significant impact on the connections between diet, health and diseases.

“As always, judging a 3MT competition was a very difficult task but the winner produced an outstanding presentation, which was slightly above the others,” Professor Strugnell said. “His storytelling, and particularly the analogies, was engaging, his humour and easy presentation manner sold the core concepts of the nanobots and the contribution they will make to humankind.”

Universitas 21 Provost Professor Bairbre Redmond congratulated all competitors in this year's challenge: “The U21 network brings together the best academic minds across the world and this competition gives us an exciting glimpse of transformative ideas which will go on to have a powerful impact on the 21st century. It is a privilege for U21 to showcase such brilliant ideas from brilliant people.”

Discover the future in three minutes