One reason pancreatic cancer has a particularly low survival rate is the difficulty in getting drugs to the tumour, but new knowledge of how pancreatic cancer cells invade neighbouring cells could change that. 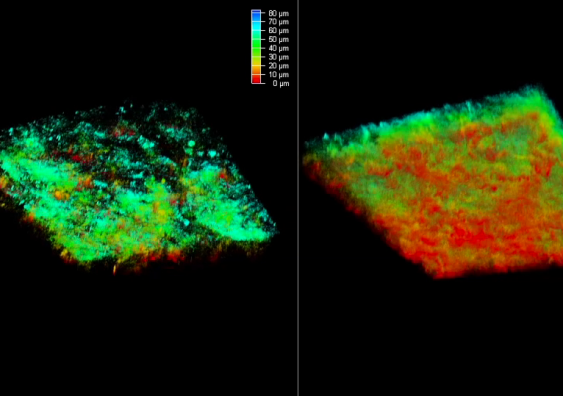 Right. Collagen matrix made by normal stromal cells. Left: When the SerpinB2 gene is switched off in stromal cells, they aren’t able to move around and remodel the collagen matrix, leaving it structurally unsound and making it easier for the tumour cells to invade.

Researchers are now using this new knowledge to design more effective drugs to tackle the disease, and by measuring the genes that control this system in patients, they could better predict survival.

The work by researchers at UNSW, the Garvan Institute, Illawarra Health and Medical Research Institute at the University of Wollongong and The University of Glasgow is published this week in the journal Oncogene.

Around 3000 Australians are diagnosed with pancreatic cancer each year but less than half are still alive 18 months later. The chances of surviving five years after diagnosis are about 7%, and unlike with other cancers, that rate has hardly improved in the past 20 years.

“One of the issues with pancreatic cancer is that it’s hard to get drugs to the actual tumour cells because they’re wrapped up in this stromal matrix,” says UNSW’s Dr Darren Saunders, the lead author on the paper.

“Better understanding the way tumours move around in that matrix will help us design better ways of getting drugs to the tumour cells.”

Pancreatic tumours: renovating before they move in

The researchers were able to observe the stromal cells in the tumour “remodelling” the collagen matrix using advanced microscopy.

First, pancreatic tumours were placed in a 3D culture system. By engineering a fluorescent jellyfish gene into the stromal cells to make them glow, researchers could observe the stromal cells moving around in the collagen, making what Dr Saunders calls a “scaffold” for cells to grow within.

When the controlling gene (called SerpinB2) was switched off, the researchers saw the cells were unable to move around to remodel the matrix.

“The stromal cells normally move around in their jelly-like environment, remodelling and building a kind of scaffold as they go. But if we switch the SerpinB2 gene off, they can’t build it,” Dr Saunders says.

“It leaves gaps or holes in the scaffold which the tumour cells can move through and spread much more easily.”

In mice, with the gene switched off, the tumours were larger and seen invading much faster, matching what was observed in the 3D culture system.

Importantly, the researchers also found that in 140 patients from the Australian Pancreatic Cancer Genome Initiative, the levels of another gene controlling this system correlated with how long people survived after a diagnosis of pancreatic cancer.

“This is interesting, because we can predict with a little more certainty which patients might survive longer because of their genetic profile,” Dr Saunders says.

The way forward: exploiting the finding with nanotechnology

Because pancreatic cancer has often spread (metastasised) by the time it has been diagnosed, drugs are needed that can target dispersed tumours.

Existing drugs lack effectiveness – partly because it’s hard to get them to the tumour – but this finding, coupled with nanotechnology, could help.

In prostate cancer for example, the five-year survival rate has improved from 70 to 90%. Over the same period, progress on pancreatic cancer has barely moved – from 5 to 7%.

Dr Saunders says this genetic information has significantly advanced understanding of the biology of this disease.

“Better understanding the disease at a fundamental level will flow through into making new treatments and using existing treatments more effectively, but it takes time,” he says.