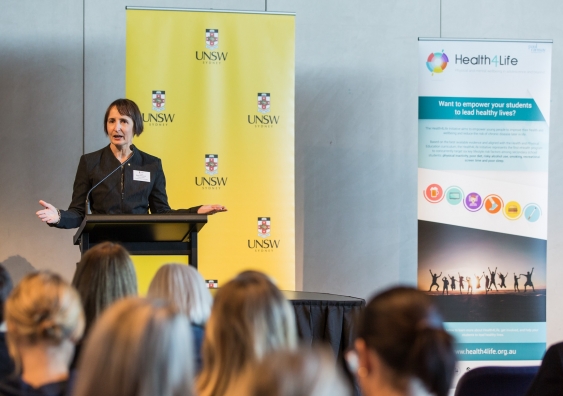 The program aims to improve young people’s unhealthy lifestyle behaviours, which a recently published study shows are well established by the late teens, co-occur in clusters and are associated with mental health symptoms.

The study published this month in Frontiers in Public Health found that more than three quarters of a sample of 853 18-year-olds had insufficient intake of vegetables (80%) and more than half reported binge drinking at least monthly (52%). More than 40% showed inadequate consumption of fruit (42%), approximately one-third reported sitting for longer than recommended periods (33%), and approximately one quarter reported smoking (29%) or failing to meet physical activity guidelines (23%).

The online Health4Life Initiative is a collaborative effort, in partnership with the Paul Ramsay Foundation. It will be led by researchers from the NHMRC Centre of Research Excellence in Mental Health and Substance Use (CREMS), based at the National Drug and Alcohol Research Centre at UNSW Sydney, in collaboration with Northwestern University USA, the University of Newcastle, Curtin University and the University of Queensland.

Dr Katrina Champion, Research Fellow at UNSW, investigator on the Health4Life Initiative and lead author of the study, said that the high prevalence of risk behaviours among the 18-year olds surveyed shows that such behaviours are well established by emerging adulthood.

“Preventive interventions delivered in adolescence before the escalation of many risk behaviours offer an opportunity to equip young people with the capacity to make healthy decisions, increase adherence to national health guidelines and reduce the risk of later chronic disease and mental health problems,” said Dr Champion.

Based on the best available scientific evidence and aligned with Australian Schools’ Health and Physical Education curriculum, Health4Life will be the first eHealth program to concurrently target six key lifestyle risk factors among secondary school students, before the onset of chronic disease. These include physical inactivity, poor diet, risky alcohol use, smoking, recreational screen time and poor sleep.

The researchers aim to recruit 8,000 students from 80 school across New South Wales, Western Australia and Queensland to test the intervention, which includes an online school-based program, a smartphone tracker application (‘app’) and a booster app to help the students most at-risk.

The trial will be led by Professor Maree Teesson, AC, Director of CREMS, and Associate Professor Nicola Newton. Professor Teesson said that chronic disease and mental health problems are the leading cause of death and disability in Australia.

“Research evidence tells us that much of the burden associated with chronic disease can be reduced or prevented by addressing behavioural risk factors,” she said.

“Typically, the risk factors develop in adolescence and occur in clusters as people engage in multiple risk behaviours simultaneously,” said Professor Teesson. “Not only do the behaviours put people at risk of chronic disease in the long term, in the short term they are associated with increased risk for obesity, mental health problems and alcohol related harms.”

Simon Freeman, Chief Executive Officer of the Paul Ramsay Foundation, said that the Foundation was committed to supporting initiatives that address the health and education of young Australians.

“We wanted to partner with the Heatlh4Life program because of the innovative way it has integrated a number of evidence-based interventions into a real world environment. We believe that Health4Life, and the world class researchers leading the project, will make a real and long-lasting difference to our community.”

David Gonski, AC, Chancellor of UNSW Sydney, said the programs were an important initiative in reducing risk and disadvantage among all young Australians. Importantly, Gonski said, it shows that university researchers are committed to translating their research evidence into practical applications. “It builds on an evidence-based drug and alcohol prevention program known as ‘Climate Schools’, which was also developed at UNSW. Importantly, the program demonstrates UNSW’s commitment to translating university-generated research evidence into helping young people in the real world.”