A healthy start for Indigenous health

In what promises to be good news for Indigenous health, UNSW has one of the largest intakes of Aboriginal and Torres Strait Islanders in first-year medicine. 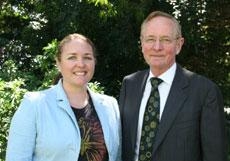 There are 19 Indigenous students enrolled across the University's six-year medical program, which will help address the shortage of Indigenous doctors in Australia.

"I've always wanted to study medicine," said 34-year-old Alison Craigie-Parsons, of Leichhardt in Sydney. "I've been working in Aboriginal health community development and social policy for the past 12 years, but it was the 'intervention' in the Northern Territory which spurred me to enrol to study medicine.

Alison is one of the eight Indigenous students who were welcomed to UNSW by the Dean of Medicine, Professor Peter Smith, last week.

There are an estimated 120 doctors in Australia who are Aboriginal and/or Torres Strait Islander, with a similar number in training, according to the Australian Indigenous Doctors Association (AIDA).

UNSW has an Indigenous students' medicine entry program, run by the Sydney Campus of the Rural Clinical School. The program is run in conjunction with UNSW's Nura Gili Programs Centre, which provides pathways to learning opportunities that embrace Indigenous knowledge, culture and histories.

"Given that Indigenous health in Australia is at such an appalling level, the most important step we can take is to increase the number of Indigenous doctors who are able to work with Indigenous communities," said Associate Professor Sue Green, Director of Nura Gili.

"Nura Gili and the Faculty of Medicine are very proud of each one of the new students and are also proud of the role we are playing in addressing the health crisis in Indigenous Australia."

The positive effects of Aboriginal and Torres Strait Islander doctors for their peoples' physical, emotional and cultural wellbeing, as well as their community capacity and political determination, have long been recognised by government and other Indigenous and non-Indigenous stakeholders, according to AIDA.

For more information on the program, go to the website.

Psychiatry in his sights

What comes after sorry?

Constitutional convention would offer a way forward on Aboriginal recognition