Ita Buttrose has been awarded the University’s highest honour in recognition of her eminent service to health. 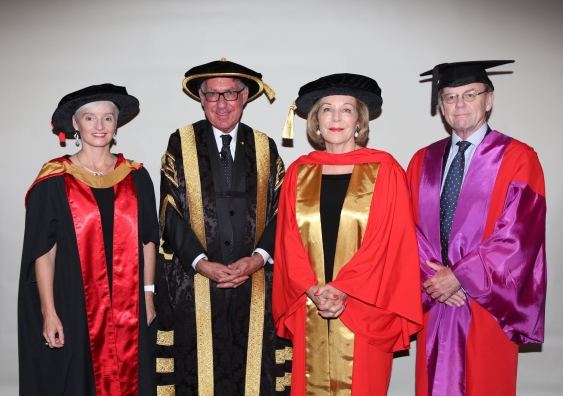 At last week’s UNSW Medicine graduation ceremony, Ms Buttrose received Doctor of the University, honoris causa, honouring her for her eminent service to health, and for being an inspirational role model for aspiring women in business and for those wanting to make a difference in society.

“Throughout her career, Ita has been a committed contributor to many community and welfare organisations and is passionate about the field of health and aged care and the rights of older Australians to receive appropriate and adequate care,” said Professor Rodney Phillips, UNSW’s Dean of Medicine, in the citation commending Ms Buttrose.

In her Occasional Address, Ms Buttrose said she was honoured and delighted to receive the honorary degree. She spoke of the importance of never stopping dreaming one’s dreams and working to achieve them.

“All too often, we allow people to talk us out of doing things that are close to our hearts. All through my career, people have told me I couldn't or I shouldn't do something I set my heart on…

“I've listened, but I've never allowed other people's negativity to deter me. No-one else dreams your dream. I've always had this belief in myself that whatever I put my hand up for, I would be able to do it.”

Ms Buttrose also encouraged graduates to take risks, to never give up trying, and to always try to make a difference.

“You must always believe in yourself, and be prepared to push yourself out of your comfort zone every now and then. Take the risk, dare to make a difference, dare to try. I believe everyone can make a difference. Something very small could actually make a big difference,” she said. 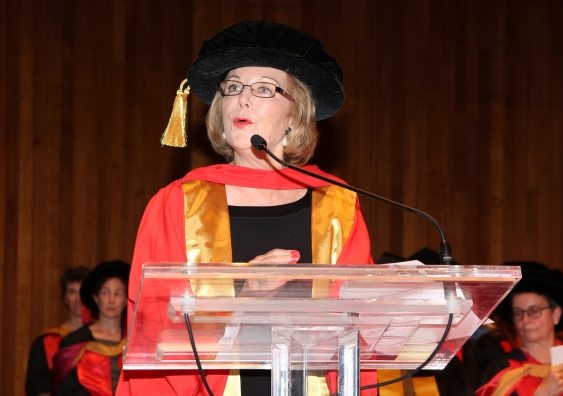 Ms Buttrose has had a distinguished career in journalism in Australia and the UK. She was the Founding Editor of Cleo in 1972 and at the age of 33 was appointed Editor of The Australian Women’s Weekly, becoming its youngest ever editor. In 1981, she was appointed Editor-in-Chief of the daily and Sunday Telegraphs – making her the first woman to edit a major metropolitan newspaper in Australia. She was invited to join the board of News Limited, Australia, becoming the first Australian female director of this world-wide media group.

After a distinguished career with both Australian Consolidated Press and News Limited, Ms Buttrose started her own publishing company, Capricorn Publishing, and created ITA magazine and later bark! magazine. She was co-host of the Channel 10 program Studio 10 from 2013-2018.

Ms Buttrose served as National President of Dementia Australia from 2011-2014. Through her work with Dementia Australia, and more recently her major support of the UNSW Centre for Healthy Brain Ageing, Ms Buttrose has devoted much of her time to promoting a wider understanding of dementia and the need for action to improve the quality of life of people with dementia and their carers. Her advocacy was pivotal in the decision of the Australian government to commit $200 million to dementia research in the 2014 budget.

She is currently Patron of the community organisation Karitane which provides services for young mothers and their children. In the 1980s she made a major contribution to public health in this country by spearheading Australia's HIV/AIDS education program.

Ms Buttrose has always been a strong advocate for the role of Australian women on boards and in high-ranking positions. She was a founding member and former president of Chief Executive Women.

She has made major contributions to UNSW, chairing the eminent Advisory Group for the high profile Australian Mental Health Prize, which was established by UNSW.

“I've had two careers, actually: one in journalism and publishing, and the other in a voluntary capacity in the not-for-profit sector – supporting charities and community causes, particularly those involved with health and wellbeing,” she said in her address.

“My voluntary work is a valued part of my life. I think it enriches a person’s life and makes us grow as people and I recommend it to you all.”

In 1979, Ms Buttrose was awarded the OBE for services to journalism. In 1988 she was made an Officer of the Order of Australia for service to the community, particularly in the field of medical education and health care. In 1992 she was awarded the Hartnett Medal by the Royal Society for the Encouragement of Arts, Manufactures and Commerce for professional achievements in publishing, journalism, radio and TV broadcasting as well as an extensive community service record, and was the first woman to receive this Medal. In 2003, Ms Buttrose was awarded the Centenary Medal for service to Australian society in business leadership. In 2011, her earlier career was immortalised in the acclaimed ABC mini-series Paper Giants: The Birth of Cleo and in 2013, she was named Australian of the Year.