UNSW’s Professor Maree Teesson has won a prestigious Australian Museum Eureka Prize for her outstanding mentorship of a team of young researchers. 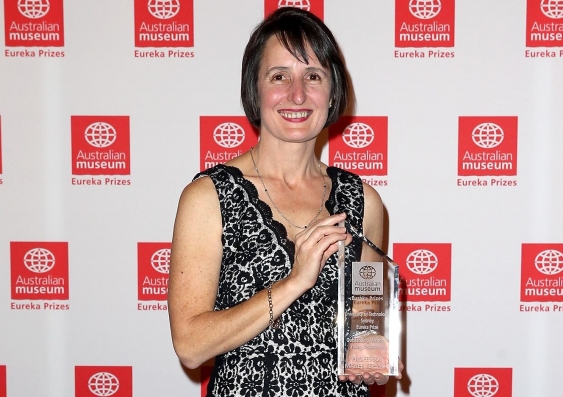 For her outstanding mentorship of young researchers, UNSW’s Professor Maree Teesson has been awarded a prestigious Australian Museum Eureka Prize at a gala ceremony at Sydney Town Hall.

Professor Teesson is Director of the NHMRC Centre of Research Excellence in Mental Health and Substance Use at the National Drug and Alcohol Research Centre.

Thousands of young Australians suffer substance abuse and mental health issues on their own – afraid to reach out for help or even admit the problem.

Professor Teesson’s team, which includes people from a variety of disciplines, connects those young Australians with the information they seek and the help they need.

Last night she was awarded the 2014 Eureka Prize for Outstanding Mentor of Young Researchers for her achievements in building such a diverse team and fostering their talents.

“Maree has built, and continues to develop, a remarkable team,” said Australian Museum Director and CEO Kim McKay. “She has a gift for guiding, nurturing and mentoring young researchers – even, seemingly, taking more pride in their achievements than in her own impressive accomplishments.”

Achievements of her team include reaching more than 20,000 Australian high-school students with online programs that focus on preventing alcohol and drug related harm.

Her vision is to build the world’s best, dedicated research program for the prevention and treatment of co-existing mental and substance-use disorders. Her passion for mentoring and developing the careers of younger researchers is central to this plan.

Some of Professor Teesson’s other achievements include:

Why not all Sydney siege survivors will need mental health help