Opinion How far off is a blood test for Alzheimer’s disease?

The potential for blood-based diagnosis of Alzheimer’s is excellent, but we have much further to travel, write Anne Poljak and Perminder Sachdev. 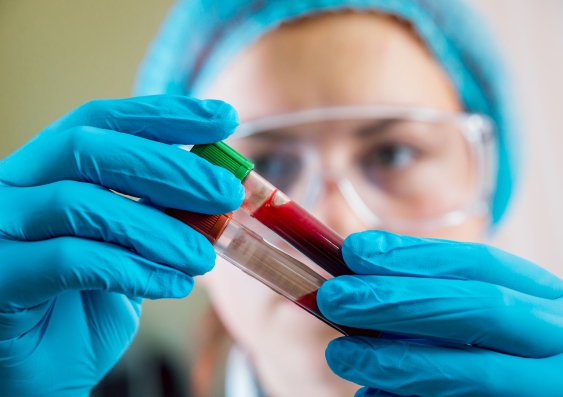 OPINION: Anyone who has ever visited a doctor’s office is familiar with the use of blood tests for the diagnosis of various diseases. Because blood comes in contact with all organs of the body, it carries markers of the health of these organs. It is an easily accessible body fluid, can be drawn repeatedly to follow the progress of a disease and, in most cases, blood tests are relatively inexpensive.

It is therefore not surprising news that a possible blood test for dementia, in particular Alzheimer’s disease, gets much public attention.

Diagnostic testing for Alzheimer’s has recently made significant progress. While an MRI brain scan will show some abnormality in Alzheimer’s, this is non-specific and appears somewhat late in the course of the disease.

A positron emission tomographic (PET) scan may be done to get a picture of amyloid deposits, a protein that accumulates in the brain with Alzheimer’s, and a spinal fluid tap can detect abnormal levels of beta-amyloid (Aβ) and tau proteins found in the brain of Alzheimer’s patients.

However, both tests are expensive and not readily available. The spinal tap is also much more uncomfortable than obtaining blood from a vein. These tests are not subsidised by the government, partly because they do not influence the treatment patients will receive since there are no current drugs that will cure or even modify the course of Alzheimer’s.

Many patients, nevertheless, want a specific diagnosis, which a clinical assessment can only guess at. As the promise of early intervention comes nearer, the call for a blood test is getting louder.

What blood can tell us

Blood has some disadvantages compared to spinal fluid. It is separated from the brain by what is called the “blood brain barrier”, which allows only some molecules across. While the spinal fluid has a more specific association with the brain, the blood has signals from all organs, so it may be difficult to establish that a particular signal detected in peripheral blood is actually coming from the brain.

Despite these limitations, considerable progress has been made in recent years, although the knowledge is still a number of years away from the clinic.

The blood, which comprises cells (red cells, white cells and platelets) floating in the fluid called plasma, has many compartments that could yield information about brain health.

White blood cells are used to obtain DNA that can provide genetic and epigenetic information. Some genetic variation does tell us about the relative risk for Alzheimer’s, but it does not help with the diagnosis. While the genes themselves do not change in Alzheimer’s patients, their expression does vary considerably through life.

Whether a gene is expressed or silenced can be regulated by short RNA molecules called microRNA, many hundreds of which are found in blood. Since their expression varies in disease, there is interest in using blood-based microRNA as a diagnostic tool for Alzheimer’s.

Blood can give us good pointers, but we need a lot to detect disease and rule out other causes. from www.shutterstock.com

A few reports have been published to suggest this strategy may have some merit, but there are a few challenges. There are many types and sources of RNA in the blood and the techniques used to stabilise and measure blood RNA are yet to be standardised. This means that different laboratories produce different results.

In mining the blood for various markers of disease, we usually search the plasma, which is a rich source of proteins, hormones, RNA and markers of inflammation.

Some proteins, such as many involved in inflammation, have been identified as potential diagnostic markers of Alzheimer’s.

The Aβ peptide, considered to be critical for the development of Alzheimer’s, can also be measured in plasma and has been frequently studied.

Another approach has shown the levels of many lipids (building blocks of cell membranes) are abnormal in the plasma of Alzheimer’s patients. This is understandable given the brain is very rich in lipids. There has also been interest in levels of the amino acid homocysteine, vitamin D, B vitamins and many other molecules.

While all this seems promising, the major limitation in the field is that the findings of one study are often not replicated by another. Such validation is central to a finding being accepted by the scientific community.

Markers in the blood are prone to change and depend upon the stage of the disease as well as other environmental and physical factors. It is also not known how well these markers differentiate Alzheimer’s from other causes of dementia or other brain diseases.

Most researchers feel the signal contained in a single blood marker may be too weak to be of diagnostic value, so we may need to use a panel of different markers. It’s hoped technologies of the future will permit us to do this by creating specific diagnostic “chips” with multiple markers selected to offer the best diagnostic test – one that is both sensitive in detecting the disease and specific in that it rules out other causes.

The potential for blood-based diagnosis of Alzheimer’s is excellent, but we have much further to travel. We need to study large well-characterised cohorts of patients with multiple markers and consolidate the findings to produce that much-awaited diagnostic chip.

The markers selected for the chip will vary depending upon the purpose. Of course, if we soon discover a drug that modifies the course of Alzheimer’s, the process of developing a blood-based diagnostic test will accelerate.