Professor John Myburgh is the recipient of the UNSW Doctor of Science honour for his outstanding contribution to the field of critical care and trauma. 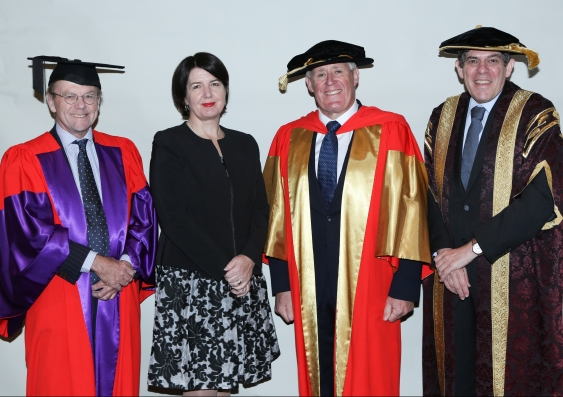 John Myburgh AO, UNSW Sydney Professor of Intensive Care Medicine and Director of the Division of Critical Care at The George Institute, has been awarded a Doctor of Science from Sydney for his outstanding contribution to the field of critical care and trauma.

Professor Myburgh has published more than 200 research papers leading to more than 10,000 citations of his work. As chief investigator in more than 15 large clinical trials he has contributed to changing policy and practises in intensive care all over the world.

At the presentation ceremony for Professor Myburgh, the UNSW’s Dean of Medicine Professor Rodney Phillips said Professor Myburgh’s research was judged to have led to “significant scientific advance and contributed to the rationalisation of care of patients within critical care units. The academic board of the university had no hesitation in recommending that Professor Myburgh be awarded the decree of doctor of science."

Professor Vlado Perkovic, Executive Director of The George Institute, said: “It has been a privilege to work alongside John at The George Institute. He is an outstanding researcher, clinician and mentor and his work has led to improved survival outcomes to critical care patients, not just here in Australia, but the world over. This is a very much deserved award and I am sure everyone at the George Institute would join me in saying a huge congratulations.”

Professor Myburgh AO is a senior intensive care physician at the St George Hospital, Sydney. He holds an honorary Professorial appointment at the Monash University School of Public Health and Preventive Medicine.

He is a Senior Practitioner Fellow and received over $43 million grant funding from the National Health and Medical Research Council. In addition to other national and international grants, total cumulative research funding to the present is over A$77 million.

In addition to his research profile, he has made a substantive contribution to education in intensive care medicine, both at undergraduate and postgraduate levels over the last 25 years. He was instrumental in establishing the College of Intensive Care Medicine, serving as a Fellowship examiner for twelve years, on the Board for ten years and as the first elected President from 2010-2012.

He is a current Council Member and Secretary-General for the World Federation of Societies of Intensive and Critical Care Medicine and Fellow of the Australian Academy of Health and Medical Science.

In the 2014 Queen’s Birthday Honours, he was made an Officer of the Order of Australia (AO) for distinguished service to medicine as an intensive care medical practitioner, educator and researcher, and as an international innovator in patient management.