IWD: From scientist to new mum and back again: balancing motherhood and academia

Balancing motherhood and academia is set to become a little easier for women in UNSW Medicine, thanks to a new scholarship named in honour of NSW Woman of the Year Professor Minoti Apte. 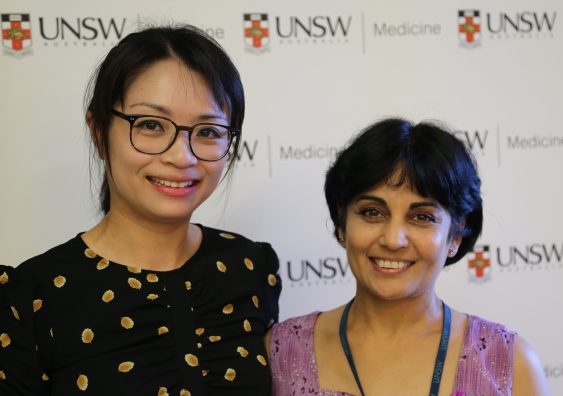 Balancing motherhood and academia is set to become a little easier for female researchers at UNSW, thanks to a new scholarship named in honour of the 2015 NSW Woman of the Year, Professor Minoti Apte.

The Faculty of Medicine scholarship, one of the first dedicated specifically to female early career researchers, will provide up to $20,000 to allow the recipient to write publications, grant applications or access research assistance.

Sometimes you need to ease up on the pressure to be ‘super mum career woman’.

The inaugural winner is Dr Yazi Ke from UNSW’s School of Medical Sciences, who was officially presented with the scholarship today.

With two children under the age of four and no immediate family support in Sydney, Dr Ke says balancing family and career is tough.

“Before starting a family I was publishing up to four papers a year, my output has now halved, and if you don’t publish, you don’t get grants,” Dr Ke says.

"Often I have the feeling I am not really doing a good job at both parenting and work. This scholarship has given me a bit of validation that at least I am doing something right and will give me some much-needed breathing space.”

Dr Ke will use the scholarship to employ a research assistant to help complete her latest research project, which is looking at the role of specific proteins in the brain that can help protect against Alzheimer’s disease.

“My path from medical student to senior academic while raising a family was challenging. I was lucky to have a supportive family, but inequality and disadvantage for women returning to work remains a big problem in Australia,” Professor Apte says.

Deep motivation, strong family support, and accepting the fact that sometimes you need to ease up on the pressure to be ‘super mum career woman’, are all crucial ingredients for a woman to be successful, according to Professor Apte.

Professor Apte says the responsibility of raising young children often coincides with critical periods of career development and progression, and successfully juggling these two aspects is one of the major career challenges still faced by women.

Removing these obstacles is one of the ten principles of the Athena SWAN Charter, established in 2005 in the United Kingdom in response to the chronic under-representation of women in science leadership.

UNSW, along with 31 other Australian institutions, is participating in the Science in Australia Gender Equity (SAGE) program of the Athena SWAN Charter in Australia. The Australia-first pilot program aims to improve the promotion and retention of women in science, technology, engineering, maths and medicine (STEMM).T

To mark International Women’s Day, some of UNSW’s leading women have written letters of advice to their younger selves, including Professor Apte, who found her letter a good way to reflect upon what she had achieved.

Do too many couples expect IVF to solve their fertility problems?