Children are the focus of a world-first online anti-stigma program that aims to change attitudes around one of our fastest growing health issues. 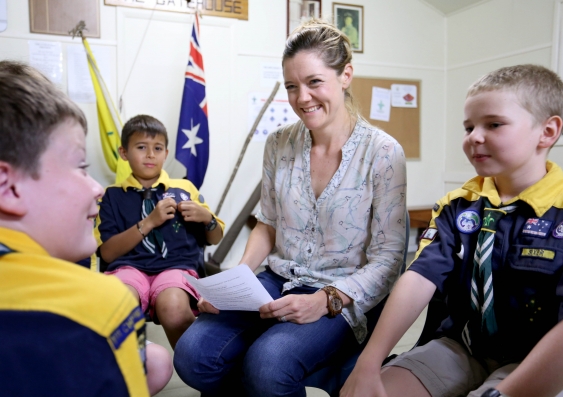 Psychologist Jess Baker is sitting in a hall in Sydney’s west with a group of Scouts watching DVDs. But these aren’t videos you’d expect a group of nine and 10 year olds to be interested in. Instead across the screen run vignettes about people living with dementia.

In one scene, a woman in an aged-care home becomes agitated after an offer of assistance from a nurse. In another a woman forgets where she lives while travelling in a taxi.

Worried, scared, confused, amused and annoyed are some of the words the children use to describe their reactions. Ten-year-old Thomas says he feels sad for the people “because they are sick”. But he knows it isn’t their fault. “One lady was angry,” he says. “She was doing very mental things and screaming at the nurse ‘get outta here’.”

The video forum is part of a UNSW-led project that aims to create a more dementia-friendly society by educating the next generation.

Backed by $75,000 funding from the National Health and Medical Research Council and the Dementia Collaborative Research Centre, the project engages children in a series of focus groups, like the recent video nights, and speaks extensively with people living with dementia, and their carers.

Information gleaned from the children will be used to develop an online education program, designed to align with Australia’s education curriculum. Research around the study has been presented at the Alzheimer's Disease International conference in Perth and a pilot program – the first of its type in the world – will be rolled out later this year.

Removing ignorance and stigma starts with education, but Australian children’s attitudes towards dementia have never been measured.

“Of the children I’ve interviewed, about 70% didn’t know what dementia was and 60% had never heard of the word,” says Baker, the study’s leader from the School of Psychiatry. “Some of the things the Scouts said reflect the misunderstandings we see in the broader population.”

By 2050, more than 900,000 Australians are expected to be living with the disease. Yet Alzheimer’s Australia’s first national survey last year found community awareness and understanding of the illness was low.

More alarmingly, a 2012 survey by the University of Wollongong found 60% of Australians would feel a sense of shame if they were diagnosed.

Having worked in aged care, Baker is unsurprised. “I encountered many adults caring for someone with dementia who sometimes behaved in less than helpful ways. I believe this was mainly down to ignorance.

“We know that children are more responsive than adults to anti-stigma education because their beliefs are not as firmly developed,” says Baker.

But the impact of mass media and popular culture should not be underestimated. A group of 11–14 year olds interviewed for a British dementia study made repeated references to the “dementors” in the Harry Potter movie series – half-dead creatures that feed on happy thoughts and memories leaving their victims in a mindless state.

Lessons can also be learned from a dementia education program in the UK involving 22 schools. The program demonstrated a significant improvement in attitudes. Children’s confidence meeting a person with dementia rose to 76% from 27% within a year.

“However that approach was very labour intensive,” Baker says. “An online education program, as short as one hour, would be more cost-effective and easier to roll out.”