Dozens of new drugs and poisons will be approved for use in Australia this year and medical toxicologist Nick Buckley is worried some could be deadly. 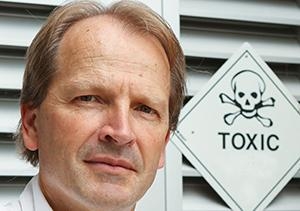 Professor Nick Buckley: "We need the same approach as with the road toll: we need to look for ‘black spots’ and develop interventions.” Photo: Maja Baska

Dozens of new drugs will be approved for use in Australia this year and already Nick Buckley is worried some could be deadly.

While the Bureau of Statistics shows one in 15 deaths in Australia is drug related, Professor Buckley says it is a field that needs more scrutiny.

Buckley, a medical toxicologist at UNSW’s Prince of Wales Clinical School, plans to change that through a $6.8 million NHMRC grant he leads that will examine prescription drug reactions, medical and chemical poisonings, and snake and spider bites.

“There are more than 1700 deaths a year from drug poisoning – that’s one and a half times the road toll – and very often this occurs in young people,” he says. It is unclear how many of those are deliberate or accidental overdoses.

Some of these deaths are due to illegal drugs, but many are from drugs approved by the regulating arm, the Therapeutic Goods Administration.

“We need to take the same approach as we do with the road toll: we need to look for ‘black spots’ and develop interventions,” says Buckley. The only problem is “there is no monitoring once a drug is introduced, so we don’t know where the black spots are”, he adds.

And it can take years to realise the extent of the problem. Although there were concerns about the cardiotoxicity of the pain reliever Dextropropoxyphene in pre-clinical trials more than 35 years ago, it “flew under the radar”, leading to more than 10,000 deaths worldwide before it was banned in Europe and North America.

“It is still not banned in Australia...” Buckley says.

Read the full story in the latest isue of Uniken. Download the new Uniken app here.