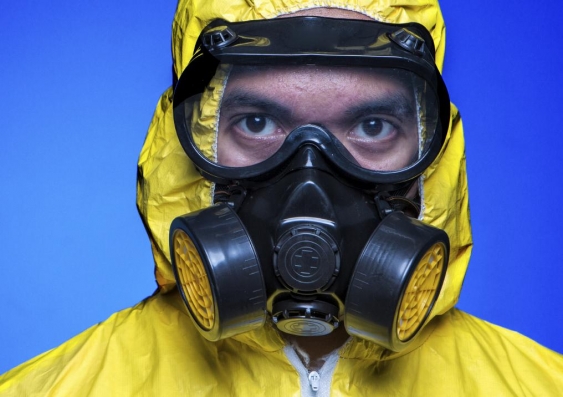 Should respirators be worn when treating Ebola? Image: iStock

Public health experts are concerned guidelines that suggest health workers need only wear surgical masks rather than higher-level protective equipment, such as respirators, when treating Ebola patients, are lacking.

UNSW Australia professor of infectious diseases epidemiology Raina MacIntyreis the lead author of a guest editorial that questions the health worker protection guidelines issued by the World Health Organization (WHO), the US Centers for Disease Control (CDC) and countries including Australia. It is published today in the online issue of the International Journal of Nursing Studies (IJNS).

The guidelines are based on evidence that Ebola is mainly transmitted through direct contact with bodily fluids rather than via airborne particles. Professor MacIntyre, who is Head of the School of Public Health and Community Medicine at UNSW, argues that the research evidence about the transmission of Ebola is limited and the guidelines may be putting the lives of health workers at risk.

“Guidelines that recommend masks do so solely on the basis of Ebola being transmitted theoretically by direct contact only,” she says. “They fail to consider the complexity of infection transmission in the clinical setting, and the documented spread of Ebola by other modes. They also fail to consider the high death rate of Ebola and the human price we may pay by getting it wrong.”

Protective equipment used by health workers treating Ebola patients is controversial. The IJNS guest editorial challenges a letter published in The Lancet in August, which argued that in some cases “goggles and masks might not even be necessary to speak with conscious patients, as long as a distance of 1-2 metres is maintained”.

This comes as Medecins Sans Frontieres MSF (Doctors Without Borders) has said the global response to the Ebola outbreak has been “lethally inadequate” and called for urgent military intervention as health systems have crumbled. Hundreds of frontline health workers have already contracted Ebola or died, many while wearing masks. MSF, the main outside responder to the outbreak, also recommends the highest level of personal protective equipment (PPE) for health workers, and so far no MSF worker has contracted Ebola. In contrast, a WHO worker contracted Ebola despite not having direct contact with an Ebola patient.

Professor MacIntyre points out that the WHO/CDC guidelines for health professionals working in the field are inconsistent with those for scientists studying Ebola under controlled laboratory conditions. Lab scientists are urged to wear higher-level protection, including respirators. Yet scientists work in a cleaner, more controlled environment than nurses and doctors. “The hospital is an unpredictable, highly contaminated setting which poses higher risk of Ebola transmission. It makes no sense to play Russian roulette with the lives of our health workers,” Professor MacIntyre says.

Professor MacIntyre’s concerns are shared by co-authors Professor Patricia Davidson, Dean of Nursing at John Hopkins University in the US and Professor Guy Richards, an intensive care specialist from the University of Witwatersrand, Johannesburg, who has treated Ebola patients in a clinical setting and whose work was cited in support of the WHO/CDC guidelines. All three argue the guidelines that recommend surgical masks for Ebola should be urgently reviewed.

“Whilst theoretical and experiment data support that Ebola is predominantly spread by direct contact, the reality in the hospital setting is much more complex,” says Professor Richards. “There is a lot of uncertainty around the mode of transmission of Ebola in hospitals … I am surprised that my paper has been cited in support of these guidelines ... I think the full PPE is warranted for health workers treating Ebola.”

Watch Professor MacIntyre explain Ebola PPE in an excerpt of her keynote address from the UNSW Symposium on Public Health Aspects of Infectious Diseases on September 4, 2014.

The full talk on PPE is available here.

Could Ebola mutate faster than we can develop treatments?