UNSW Sydney researchers have compared plant extract cytisine to an established quit smoking aid in a clinical trial for the first time. 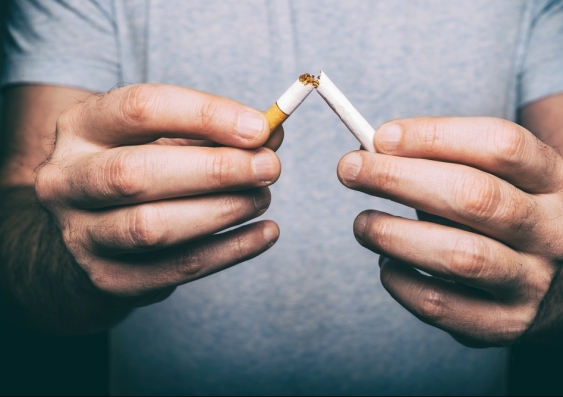 Cytisine is a safe and effective aid for helping people quit smoking – and a new UNSW-led study has shown participants tolerated it better than a first-line pharmacotherapy for smoking cessation.

Results from the largest trial to date to compare cytisine’s effectiveness to the most effective single-form pharmacotherapy treatment, varenicline, could lead to wider cytisine access for people who smoke. Trial findings were published in The Journal of the American Medical Association (JAMA).

“But before this trial, we didn’t know whether it is non-inferior to varenicline in terms of quit smoking rates at standard dosing.”

Dr Courtney and a team at UNSW’s National Drug and Alcohol Research Centre (NDARC) have answered this question by recruiting 1452 Australian adults into a world-leading non-inferiority trial. In this type of trial, researchers seek to establish that one type of treatment – in this case, cytisine – is “no worse” than the established treatment, varenicline. Research participants were daily smokers when they entered the trial and were willing to make a quit attempt using one of the study medications.

The study compared standard dosing for both medications – cytisine for 25 days and varenicline for three months – with participants randomly allocated to one of the two medication groups and followed up over a seven-month study period. Participants that reported six-month continuous abstinence from tobacco smoking via telephone interview at 7-month follow-up were asked to complete a carbon monoxide (CO) test to verify the primary smoking abstinence outcome.

Dr Courtney said people who smoked often stopped use of smoking cessation aids because of side effects, such as nausea.

“We found adverse events for cytisine users occurred less frequently compared to varenicline, with participants reporting nausea and abnormal dreams significantly less. This is an encouraging result that may lead to more smokers taking up this treatment option, as we know such adverse effects often lead to treatment discontinuation,” he said.

The researchers also found promising results towards the end of cytisine treatment period – 42.5 per cent of cytisine participants quit at ~4 weeks, compared to 32.3 per cent in the varenicline group.

“A short treatment period of 25 days for cytisine compared to three months for varenicline is an added benefit, but to establish this initial treatment effect so early is very promising. Results from extended dosing studies may even show greater promise for cytisine’s clinical effectiveness,” said Dr Courtney.

Affordable and effective – but not widely available

Director of NDARC, Professor Michael Farrell said, “Cytisine presents as a cheap treatment option for so many countries and can assist to reduce tobacco-related harms.”

While cytisine is not currently licensed for use by the US Food and Drug Administration or Australian Therapeutic Goods Administration, the study findings are of significant interest, as a direct investigation for cytisine at standard dosing against the most effective sole pharmacological treatment was an unknown, until now.

Dr Courtney said: “Here we have a low-cost treatment that has been used for over 50 years in some countries, effective for promoting smoking cessation with a very promising adverse event profile found in this trial compared to a current frontline smoking cessation aid.”

Cost for cytisine is a critical factor. Dr Courtney said: “Cytisine presents as a much-needed additional treatment option for Australian people who smoke, and the trial results will be of interest to regulators that may be keen to see the full potential realised for such a low-cost, effective and well-tolerated cessation aid.”