Membrane charge sensor to watch the regulation of our T cells

New tools developed at UNSW have increased the ability of researchers to measure and see how T cells work and respond to threats. 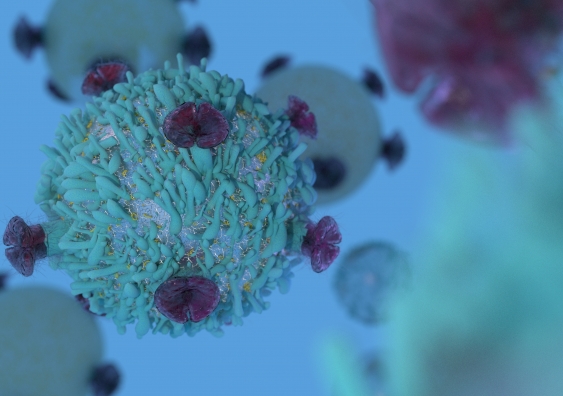 UNSW researchers with the ARC Centre of Excellence in Advanced Molecular Imaging have built a sensor to measure the membrane charge of our T cells.

T cells are the “brain” of our immune system, so understanding how they sense and respond to antigen is extremely important.

Until now we did not know how antigen binding to the T cell receptor triggers an intracellular activation response, or why the receptor does not signal when it is not bound to antigens.

Electrostatic interactions between proteins (the receptor) and the membrane play a key role here.

Now, there is a tool for measuring electrostatic membrane interactions in cells.

Yuanqing (Alex) Ma, a PhD student of UNSW Scientia Professor and Imaging Centre of Excellence Deputy Director Katharina Gaus, was the lead author on a paper in Nature Biotechnology.

Alex said the membrane charge sensor measures the electric potential at the inner leaflet of cell plasma membrane – a different membrane property from the transmembrane potential often known in the field of neuroscience.

“We’ve made a very cool tool using some nifty science that allows us to measure and see how T cells work,” he said.

“Our FRET sensor can measure tiny charges in living cells. And this lets us know how the membrane environment affects the T cell receptor and why it signals or not.

The idea of the sensor design was actually quite simple, but getting the idea into action was not straight forward, Alex said.

“There was a lot of trial and error in building the sensor and then even more when we began to test the sensor,” he said.

“Once we had tested the sensor outside of the cell, we had to test it inside the cell – which was also quite tricky. There are so many unpredictable factors that occur within a cell that often complicate our interpretation of the results.  As a result, multiple controls were made to justify the result, which was tough.”

Another tool the team developed recently is a sensor that changes colour when the T cell receptor becomes clustered, reported in the journal Nature Communications.

This sensor too works in living cells. Now UNSW researchers can monitor the membrane environment with the charge sensor, and the dynamics of the receptor with the clustering sensor.

“These sensors provide us with the ability to map membrane charges and receptor dynamics in a cell over time, which has increased our ability to understand the biological function of membrane charge in different cell activities,” Alex said.

“This was difficult before due to lack of tools.”

One of the things the sensors have helped the researchers understand is how the membrane lipid environment affects the structure of the T cell receptor during an immunological response.

Professor Gaus said they can now follow how T cell activation is regulated.

“Before this work we could only guess why the receptor does not signal in resting cells,” she said.

“These sensors were a tour de force by Alex – it was not easy, for example, to tune the sensor to the range in which membrane charges switch the receptor on and off.

The team will use the tools made in the lab at UNSW to better understand how T cell signalling begins and is regulated.

“We look forward to putting them to work and discovering just how our immune system triggers downstream responses,” Professor Gaus said.