Researchers from the Papua New Guinea Institute for Medical Research and UNSW's Kirby Institute say health services are needed to tackle high rates of HIV, hepatitis and STIs among key populations in PNG. 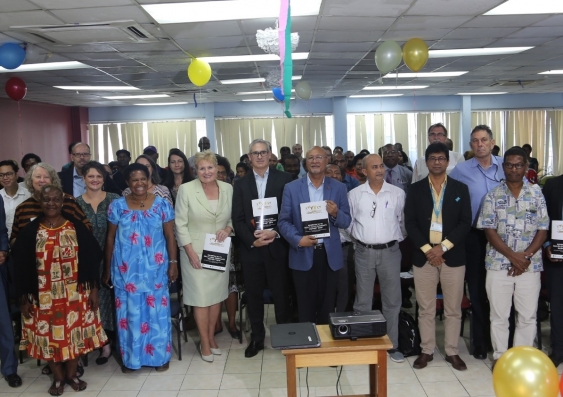 Expanded health and social services are needed to urgently address HIV in Papua New Guinea, according to new research conducted by the Papua New Guinea Institute for Medical Research (PNG IMR) working in a partnership with the Kirby Institute at UNSW Sydney and the US Centres for Disease Control.

The study, called Kauntim mi tu (or “Count me too”), represents the most comprehensive understanding of Papua New Guinea’s HIV epidemic to date among the so-called “key populations” considered to be most in need of HIV-related health services. It will set the plan for the national response, providing crucial clinical and behavioural information, to support the country’s efforts in prevention and care.

The survey, the first of its kind conducted in PNG, collected data from the populations considered most at risk for HIV and sexually transmissible infections (STIs): female sex workers, men who have sex with men and transgender women. This is the first time that state-of-the art methods have been used to obtain estimates of infection rates in key populations in Papua New Guinea.

Dr Angela Kelly-Hanku, UNSW Scientia Fellow from the Kirby Institute and PNG IMR principal investigator on the study, says the research provides clear information to guide where the country’s limited resources need to be targeted in order to turn the epidemic around.

“HIV prevalence among female sex workers in Port Moresby, Lae, and Mt. Hagen was 14.9%, 11.9%, and 19.6% respectively. Even more concerning is that only less than half of those with HIV were aware they had the virus. Far more work needs to be undertaken to ensure increased access to testing,” says Dr Kelly-Hanku.

“The rates of HIV, hepatitis and STIs in these populations are alarming. However, equally concerning is the high prevalence of stigma, sexual and physical violence, poverty and depression experienced by these populations,” says Dr Kelly-Hanku. The report reveals that almost half of the female sex workers, men who have sex with men and transgender women surveyed said that they felt they needed to hide their sexual practices when accessing health services.

“People who are concerned about stigma from health services may be deterred from attending and will not be able to receive the full range of services available. This is why a holistic approach to HIV and STIs is urgently needed in PNG, alongside a scale-up in supply of essential antibiotics and HIV treatment.”

The report was released today in Port Moresby by the PNG Minister for Health and HIV/AIDS, the Honourable Sir Puka Temo.

Kauntim mi tu was funded by the Government of Australia, the Global Fund for AIDS, Tuberculosis and Malaria and the US Centre for Disease Control and Prevention, with financial support from PEPFAR with in kind contributions from the PNG National Department of Health, WHO, Cepheid, FHI360, Oil Search Foundation and Population Services International.

The report gives voice to the populations represented through the use of qualitative data and important community engagement. These communities have been central partners in the design and conduct of the study, in particular the civil societies, Kaul Champions and Friends Frangipani which represent them.

At the request of these communities, the report was dedicated to Professor David Cooper, AO, Director of the Kirby Institute, who passed away in March 2018 after a short illness. The dedication is in honour of his tremendous efforts to improve HIV treatment, demand treatment access to all and his advocacy to support those most vulnerable to HIV.