New funds for research on ROR receptors in ovarian cancer

Ovarian Cancer Research Foundation grants will help UNSW researchers in their mission to improve the long-term survival of women with ovarian cancer. 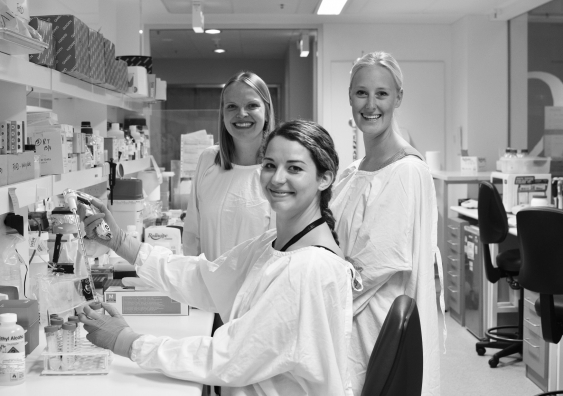 UNSW researchers will gain new insights in their work to stop the spread of ovarian cancer with grants from the Ovarian Cancer Research Foundation.

The funding will allow Dr Caroline Ford and her team at the Lowy Cancer Research Centre to build a three-dimensional tumour model to test their findings on the ROR "family" of receptor molecules, which hold promise as potential drug targets.

Unlike the flat surface of traditional testing materials, or assays, which can only look at vertical or horizontal migration, a three-dimensional model will provide a view of how cells move in space and time, and how the microenvironment contributes to carcinogenic processes.

Post-doctoral researcher Claire Henry travelled to the Lengyel Lab in Chicago last year to observe a novel 3D co-culture method which she is now using to validate the team’s findings on the RORs, with a particular focus on the role of the tissues surrounding the cancer cells, known as the stroma.

How the cancer interacts with the surrounding tissue is a factor increasingly recognised as vital to tumour growth and survival.

The team’s recently published paper in Translational Oncology was unique in that it was the first to look at both ROR1 and ROR2 receptors and both tissue and stroma in the same study.

"Of great interest to us, it showed significant overexpression of ROR2 in the stroma, especially in metastatic and recurrent samples," Dr Ford says.

"Our 3D model will allow us to explore this finding in greater detail. The strength of the ROR2 expression in the recurrent sample in both tumour and stroma suggests it could be a worthy drug target and we are excited to pursue this."

The OCRF grant will also support analysis of data from the RNA sequencing of a model high grade serous ovarian cancer cell line in order to examine what is happening at the molecular level after the RORs have been silenced.

The foundation is Australia’s leading independent body dedicated to national ovarian cancer research, and this year it received the highest-ever number of applications in its 17-year history.

"The strength and quality of research applications received only bolsters our faith that we can achieve a world where every woman, everywhere can be free from the threat of ovarian cancer," CEO Lucinda Nolan said.

Dr Kristina Warton, of the School of Women’s and Children’s Health (Methylated Circulating DNA in Blood for the Early Diagnosis of Ovarian Cancer) also received an OCRF grant.