UNSW researchers have discovered a strain of norovirus they warn could cause a severe epidemic of acute gastroenteritis in Australia this winter. 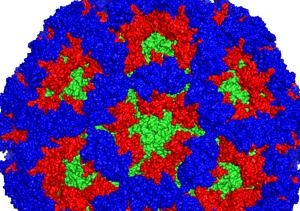 UNSW researchers have discovered a new strain of norovirus that they warn could cause a severe epidemic of acute gastroenteritis in Australia this winter.

Known as Sydney 2012, the highly infectious mutant virus has already caused an epidemic of nausea, vomiting and diarrhoea in Europe, with an estimated 1.2 million cases of gastro in the UK during the colder months.

It has led to the closure of dozens of hospital wards there, and affected schools, age-cared facilities, cruise ships and workplaces, resulting in headlines in the British press such as the Chunder from Down Under.

Professor Peter White, and his team in the School of Biotechnology and Biomolecular Sciences in the Faculty of Science, identified the new strain from Sydney patients last March, in collaboration with researchers at the Prince of Wales Hospital.

Of the 40 different strains of norovirus circulating in the community at any time, only one type, known as GII.4, causes epidemics and pandemics.

Professor White, a molecular virologist, said his team found that Sydney 2012 was a member of these notorious GII.4 noroviruses.

“So I knew straight away it was a potentially pandemic strain,” he said.

“I noted it was quite different to what we’d seen before. It was a hybrid,” Dr Eden said.

They found Sydney 2012 was a combination of two strains that originated in Holland and Japan in about 2007, and must have initially emerged in a patient who was infected with both.

It is no more virulent than other strains, but its novelty means it can evade the human immune system.

“Even if you’ve had a norovirus infection in the past it won’t protect you from this one,” Professor White said.

Although it was first identified and characterised in Sydney, the new strain only accounted for about a quarter of the infections in NSW last winter, with this figure steadily increasing.

But it was responsible for 75 per cent of cases in Adelaide and almost all the cases of gastro in New Zealand.

It is expected to become the dominant strain in Australia in winter, taking over from the previous pandemic strain known as New Orleans 2009.
“As many as 400,000 people could become infected,” Professor White said.

Sydney 2012 has also spread to Japan, France, Belgium, Denmark and the US.

It is likely to be the cause of an unusually high number of summer cases of gastroenteritis in Melbourne, and for recent outbreaks on cruise ships visiting Sydney.

Professor White established the Australian and New Zealand Norovirus Surveillance Network of testing laboratories in 2006, which has links with two similar organisations in Europe and North America to form a global network.