For First Nations peoples living with Dementia, loss of speech can bring loss of connection to family and culture. A new initiative has found a culturally friendly way to assist with communication. 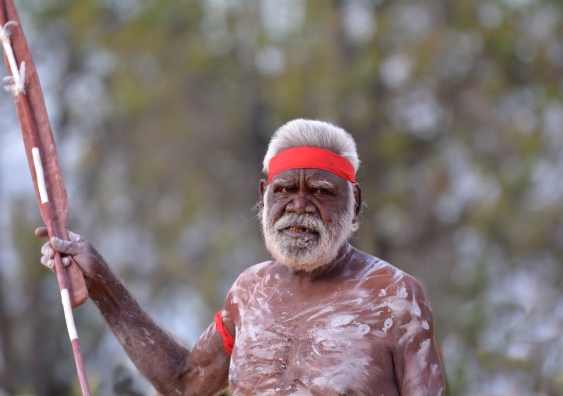 Elders have a significant role in First Nations communities, and there is a strong preference for their care to continue at home. Photo: Shutterstock

A decline in verbal skills is a source of grief for any person living with dementia.

For First Nations peoples, the loss of speech brings the added pain of lost connection to Country, community, family and culture, which are so central to their health and well-being.

Dementia is a serious emerging health issue for Indigenous people, who experience the disease at a rate between three to five times that of the general population, with onset at an earlier age.

The prevalence of dementia-related risk factors such as diabetes and vascular disease, a lack of education and awareness, and cultural considerations means diagnosis of the condition is often overlooked or delayed by health care services.

Dementia Support Australia, funded by the Australian government, has produced a set of picture cards specifically to support Aboriginal and Torres Strait Islander people as their verbal skills decline and dementia symptoms progress.

According to the Australian Institute of Health and Welfare report Dementia in Australia, released in September, rates of dementia for Indigenous people in Australia in remote and rural communities are “among the highest in the world”.

Elders have a significant role in First Nations communities, and there is strong preference for their care to continue at home or somewhere where they can remain close to their families. There is sensitivity to the idea of removal from their communities. There is a view held by some First Nations people that dementia should not be viewed as a medical issue. Rather, it should be seen as part of the natural cycle of life and death. It’s not a problem as long as it does not adversely affect their cultural connections or responsibilities as elders.

As identified in the recent Royal Commission into Aged Care Quality and Safety, there is a pressing need for culturally sensitive support and services for First Nations people living with the condition. One area requiring focus is assistance with communication for people suffering from dementia.

A culturally safe way to communicate

The picture cards, co-designed with First Nations representatives including artist Samantha Campbell, are a simple yet, we hope, effective tool. We recognise that the inability for a person with dementia to communicate what they want or need can be frustrating for both them and care staff.

For an Aboriginal and Torres Strait Islander person with dementia, the communication barrier with those providing care can be greater due to language and cultural differences.

Since its inception in 2016, Dementia Support Australia has assisted up to 300 Aboriginal and Torres Strait Islander clients. For consultants based in Alice Springs, about 80% of their referrals are Indigenous Australians. The picture cards are based on the learnings of this work.

The cards are the first of their kind, designed to support First Nations older people and people with dementia. Co-designing the cards involved listening to and learning what First Nations people needed.

Australian Regional and Remote Community Services, which provides care and support to older people in regional and urban communities throughout the Northern Territory and beyond, had a critical role in reviewing Ms Campbell’s work. Anthony Lew-Fatt, ARRCS Regional Manager Indigenous Programs, ARRCS Care Manager Kerrie Stevens, based in Mutitjulu, and ARRCS Care Manager Irene Snell, based in Tennant Creek, all had input.

“Trial” sessions were organised with residents living with dementia in one of ARRCS’s care homes at Alice Springs with some changes resulting to the illustrations following feedback.

The cards have been a success, with more than 1,300 sets so far downloaded or ordered since they were launched in July during NAIDOC Week.

Ms Campbell, a proud Dagoman woman, did the illustrations for all 58 cards in each set. Each picture card was carefully considered for its cultural meaning. Ms Campbell created images based on what would relate to the lived experiences of First Nations people across Australia.

For example, when illustrating the doctor picture, Ms Campbell didn’t draw the stereotype of a westernised doctor dressed in a white coat. This is because some First Nations people may perceive white coats and hospitals as places where people go to when they’re sick and don’t return home due to negative historical experiences with health services.

So the doctor is illustrated someone in a casual shirt, to depict a “friendly bush doctor”.

A set of illustrated cards is divided into eight categories of People, Activities/Objects, Food/Drinks, Personal care, Health, Feelings, Places, and Animals. Each card has the English word and includes space on the back to write the word in the language of the person.

The designs help carers and medical staff communicate with the person they are caring for. Activities such as showering, needing to see a doctor or going for a walk are communicated through the cards.

They can also help a person with dementia start a conversation or reflect on their experiences. This is an important way of revisiting past memories, usually in a positive way, and keeping these memories alive.

Last week the cards won the Indigenous Communities category in the 2021 Future of Ageing Awards, run by Inside Ageing magazine.

However, it’s just the beginning of what is expected to be a long journey towards understanding and respecting the needs of Aboriginal and Torres Strait Islander people living with cognitive impairment.

Dementia Support Australia intends to reach out to recipients of the cards to obtain feedback on possible improvements and additional new designs for future editions. Of course, there needs to be more investigation and innovative thinking to respond fully to the prevalence of dementia in First Nations people.

Having a brain injury does not mean you'll get dementia