The next frontier in medicine

World experts in the emerging field of nano-scale medicine are in Sydney for a major international conference hosted by UNSW. 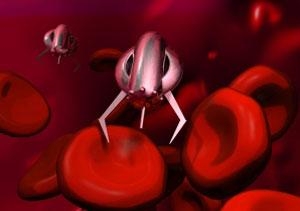 The next frontier in healthcare – nano-scale medicine – will be the focus of a major international conference hosted by the University of New South Wales (2-4 July 2012).

Measured in millionths of a millimetre, nano devices, systems and materials offer opportunities in diagnostics and treatment not possible in conventional medicine.

“This is the next frontier in medicine, where we can actually help the human body perform its natural functions to fend off and treat disease,” says Scientia Professor Justin Gooding, Joint Director of the Australian Centre for Nanomedicine (ACN) at UNSW. “Nanomedicine has the potential to completely change the way we practice medicine.”

“All of the proteins and biological molecules in our bodies are in essence little nano-machines,” says Gooding. “Now we’re working on the same level – building nano-scale devices that can better interact with these biological molecules. It’s a more targeted approach.”

“Some of the promising developments are the ability to create nano-devices and structures that can deliver drugs to diseased tissue; deliver gene therapy that can switch off a disease gene; or destroy and halt the growth of cancer cells,” says Professor Maria Kavallaris, Joint Director of ACN.

“You can imagine them as tiny cargo carriers,” she says. “Medicines can be degraded and broken down in the body before they reach their intended target. But when they are carried and encapsulated in these particles they don’t get released until they reach the diseased cell. The cell then takes up the particle, which releases its cargo. It’s like docking and unloading a truck.”

“As a cancer researcher, the possibility of being able to specifically target cancer cells and spare the normal cells – which are often unintentionally affected by chemotherapy – is a major advancement,” she says.

The conference is hosted by UNSW’s Australian Centre for Nanomedicine. Launched in 2011 by Australia's Chief Scientist, Professor Ian Chubb, the Centre crosses medicine, science and engineering and is investigating strategies to better diagnose and treat illnesses such as cancer, diabetes, multiple sclerosis, Alzheimer’s and Parkinson’s disease.

Nanomedicine, the next frontier – Uniken out now