The father of social business and microcredit, Professor Muhammad Yunus, has given an empowering talk at UNSW, challenging his audience to harness the energy and the imagination of youth. 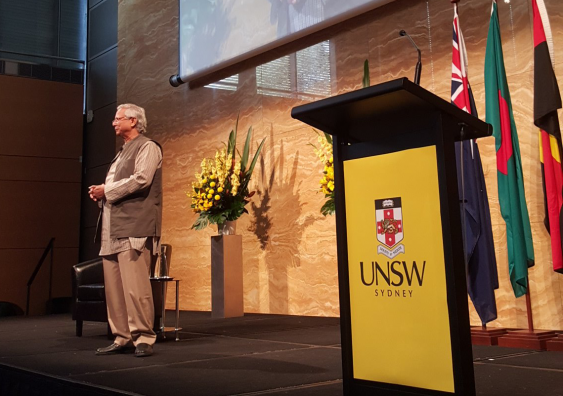 If you have a spare 10 minutes to give to your imagination, you can invent a business that could transform lives and help solve the world’s biggest problems.

Nobel Laureate Muhammad Yunus set this challenge when he visited UNSW, which is home to one of 18 Yunus Social Business Health Hubs around the globe.

In his empowering public lecture, Professor Yunus said the key to sustainable global development was harnessing the energy and the imagination of youth.

“We must believe we have unlimited capacity to change the world,” he said.

“Once we are convinced, then we ask the question, how am I going to use it?

“Imagine the world you want to create … If you imagine, it will happen.”

Known as the father of social business and microcredit, Professor Yunus talked about how it all began with him lending money from his own pockets to villagers who lived near his university campus in Bangladesh.

“I looked at the conventional banks,” he said. “Once I learned how they do it, I just did the opposite, and it worked.”

As of December 2015, his world-changing Grameen Bank had 8.81 million borrowers, 97% of whom were women.

Where Professor Yunus found problems, he searched for business ideas that could solve them.

He challenged his audience to do the same – to continue the move to “social business” models that alleviate poverty in the same way that charity might, but give a return on investment.

“All human beings are born as entrepreneurs, this is part of our DNA,” he said.

The full lecture is available on Soundcloud here.