Health experts have agreed a bigger emphasis on plant-based nutrition would improve the health of people and our planet, at a UNSW Sydney panel discussion for National Science Week. 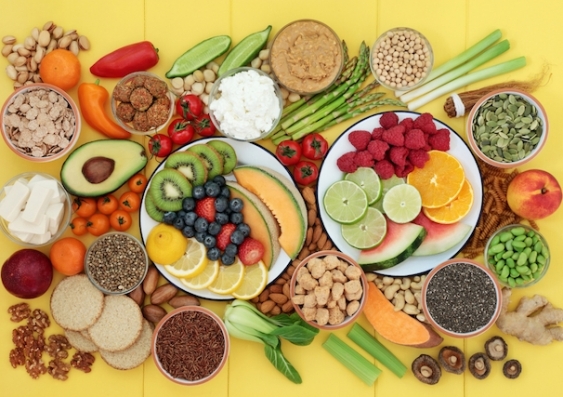 Experts at the "Eating for the Planet" panel discussion explained what is known as the “planetary health plate” which should consist of about half a plate of vegetables and fruits. Photo: Shutterstock

At a UNSW Centre For Ideas event last week, chaired by the UNSW Dean of Medicine Professor Vlado Perkovic, experts discussed if it was possible to feed a future population of 10 billion people a healthy diet within planetary boundaries.

The panellists agreed that a shift towards embracing plant-based nutrition, consuming fewer animal products and eating only what our bodies needed would help to improve our health and that of the planet.

He said: “Around the world, there's an unfolding ecological disaster … ozone depletion, rising Co2 emissions, rising sea and land temperatures, deforestation, freshwater depletion, biodiversity loss, the list goes on. … And of course, the devastating scenes from here in Victoria and across the border in NSW back at the start of the year.

“But of course, it’s an ecological health disaster unfolding as well: two billion people continue to be overweight or obese – 600 million are obese – and one in five children across the planet … continue to be permanently stunted for life because of a lack of optimal nutrition in their first five years.

“We have our global targets: in 2015 we set them as a planet, the SDGs, the Sustainable Development Goals. Food is inextricably linked to almost every single SDG … poverty, zero hunger, good health and wellbeing – food is a leading contributor to the global burden of disease. We know that education and educational attainment opportunity performance are so inextricably linked to nutrition.”

Eating for a sustainable future

The panel’s discussion focused on the implications of the reference diet that came out of the EAT-Lancet Commission on Food, Planet, Health, which brought together 37 world-leading scientists from across the globe to develop the scientific blueprint for a healthy and sustainable future. 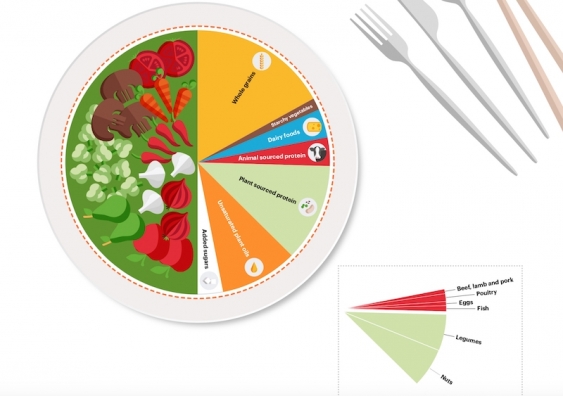 Figure 3 from the report by the EAT-Lancet Commission on Food, Planet, Health illustrates what is known as the “planetary health plate”.

As the graphic above illustrates (Figure 3 from the EAT-Lancet Commission’s report), what is known as a “planetary health plate” should consist of about half a plate of vegetables and fruits; the other half, shown by contribution to calories, should consist of primarily whole grains, plant protein sources, unsaturated plant oils, and (optionally) modest amounts of animal sources of protein.

Dr Demaio said: “Importantly, I should say also that that reference diet is about 2500 calories a day, which is actually considerably less than many high-income countries consume, countries that are struggling with various effects of the overconsumption of unhealthy foods, but also a dramatic increase for many low and middle-income countries around the world.”

Given the implications of the reference diet espoused by the EAT-Lancet Commission, the panel discussed how people can be encouraged to have a diet that is better for their health and that of the planet.

Dr Cohen agreed it was a great opportunity to start the discussion about this important issue, whether it was at a government, community or individual level.

“There is still a gap between what the recommendations are, or what's considered a healthier diet, versus what we are doing as Australians. So, for anyone watching this, it can be sometimes overwhelming when you get given these recommendations: 50 per cent of your plate should be fruit and vegetables and avoid processed foods,” she said.

“One of the key messages for anyone listening is, pick somewhere to start. That could be as small as, I'm going to try and have vegetables at my breakfast for a change rather than cereal, or I'm going to have one less meal with an ultra-processed food. I know these seem small, but it’s about making very small, gradual changes over time.”

Dr Jones said the reference diet had broader implications for society and how we produced our food, but there was no “silver bullet policy” that would fix things overnight.

“The great thing about the report is that it sets out some targets and then we're on a journey to get there, but we need to start now. As Jen said, I think education is necessary. But it's not going to be sufficient to drive change, because you can't really just tell people to eat better, and then put them out in an environment where they're surrounded by unhealthy, unsustainable cheap foods,” she said.

“A lot of my work focuses at a population level. And we look at things like, how can we use laws, taxes, subsidies, things that are going to change the environment overall. We can see that in some countries they are already using these to shift to a healthy diet. So, somewhere like Chile has warning labels on junk foods, and that's good for individuals.

“But I think the interesting thing is what it does to companies; if it makes them change what they put in foods. And we can already see discussions happening now around things like a meat tax, for example, based off the health consequences of processed meats, particularly say, for cancer.

“But we could say that a meat tax potentially also has environmental benefits. I think we're going to have to really hone the design of the policy to make sure that we get both objectives.” 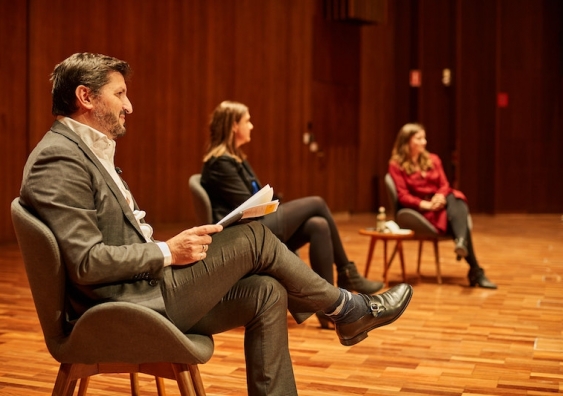 The panellists also answered audience questions to help people understand how to make healthier choices with what they ate.

Mr Gameau discussed native foods in the context of a question about what sustainable and alternative food sources the world should be moving towards. He said there was a now huge opportunity, especially as communities rebuilt after the bushfires, to be really strategic with what we planted and grew back.

“Just seeing how many species were lost, now’s the chance. If we are going to revegetate some of these landscapes, let’s grow and pollinate it so that we can give habitat to bees and these other insects to come back and we've got a chance to start again,” he said.

“We don't want to waste this opportunity. We have such a gift in this country which is so unique. That's what's so beautiful about this planet. Each region has its own specialty and Australia is blessed with the animals and the plants and the foods we should be eating, that the majority of us know nothing about. So, I think now is a really great time to bring that conversation in.

“I know a lot of farmers since the fires have been reaching out to the Indigenous community doing fire ecology training, but also just tree management training and looking at really interesting modes of what they can do on their farms, which wouldn't have happened, I don’t think, without the fires.

“And so, the more that we can promote those conversations, this is a really great opportunity to bring in that indigenous wisdom, and that indigenous knowledge which we should have done a long time ago.”

Mr Gameau recommended a couple of books if people wanted to learn more about Indigenous foods.

“I have just finished reading Tyson Yunkaporta’s book Sand Talk: How Indigenous Thinking Can Save The World and it's a profound read, just to see the lens that we've been looking at, especially with agriculture – and Bruce Pascoe’s book is the same – to suddenly start looking at this land, our country in a very unique way, and how these people survived and the foods they ate for so many years,” he said. 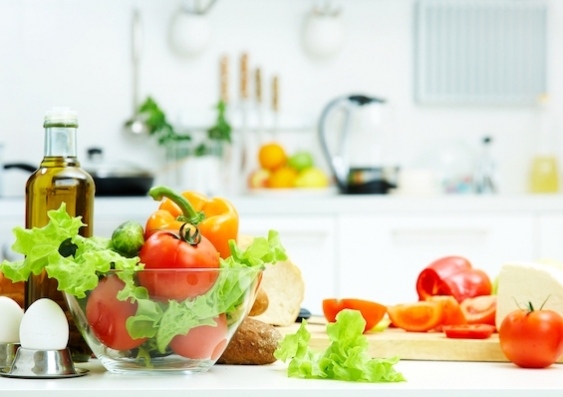 Healthy eating is great if it does not lead to an obsession, experts advise. Photo: Shutterstock

The question of plant-based ‘meat’

Another interesting question asked about the nutritional status of plant-based “meats” and whether such food could help improve nutritional outcomes.

In reply, Dr Cohen acknowledged the trend towards plant-based eating and increase in plant-based “meat” products and meals appearing on supermarket shelves in recent years.

“I think, the danger of some of those, and again, that's a strong word, is that we're going still down the line of that processed food or ultra-processed food,” she said.

Dr Cohen said that while there was potentially a place for plant-based meals, people should not be seduced by the illusion of a product being “healthier” simply because it was plant-based.

“But the reality is, it’s just another version of an ultra-processed food, just remodelled into something different,” she said.

“And again, when we're looking at processed foods or ultra-processed foods, there's packaging involved with that. So, there's that discussion around sustainability there as well.”

Dr Cohen encouraged people to shop carefully if they were considering plant-based meals.

“So, I think, they potentially have a place, but you have to be very, very conscious of what you're buying when you are in the supermarket and don't think just because it's plant-based, that means that it’s healthy,” she said.

A recording of the event is available on the UNSW Centre For Ideas website.

UNSW hosted 15 events as part of National Science Week.  The Centre For Ideas events received more than 5000 registrations, with 900 registrations for this event, “Eating for the Planet”.