HIV/AIDS is “not yesterday’s issue; it is not a problem that has gone away”, HIV campaigner Lord Norman Fowler has told a UNSW audience, arguing that the epidemic needs to be raised higher on the global health agenda. 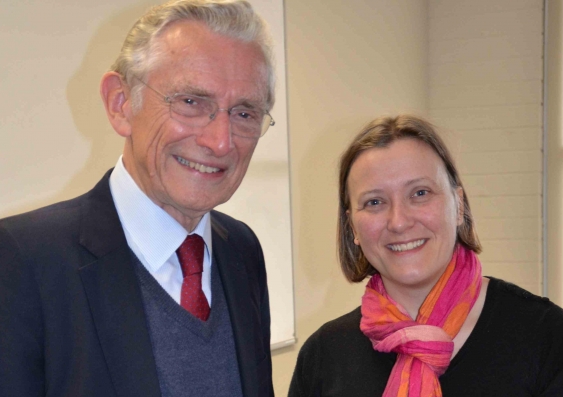 HIV/AIDS is “not yesterday’s issue; it is not a problem that has gone away”, HIV campaigner Lord Norman Fowler has told a UNSW audience, arguing that the epidemic needs to be raised higher on the global public health agenda.

Anti-retroviral drugs are saving lives and the search for a vaccine is underway, but 1.6 million people still die from AIDS every year and 2.3 million people are newly infected. “It is a very brave man who is willing to say with certainty that an end to AIDS is just around the corner,” he said.

Lord Fowler is currently a Senior Visiting Fellow at UNSW’s Centre for Social Research in Health, but is best known as the UK Thatcher government’s Health Secretary at the height of the 1980s AIDS crisis. He is in Sydney for the publication of his new book: AIDS: Don’t Die of Prejudice (published by Biteback and distributed by UNSW Press)and to speak at the second annual Kirby Institute Symposium at UNSW and the International AIDS Conference in Melbourne.

AIDS: Don’t Die of Prejudice is based on Lord Fowler’s visits to nine cities in countries including Russia, India and Uganda, where he has observed a range of entrenched, prejudicial views that act as “enormous” barriers to HIV prevention.

Negative attitudes towards homosexuality, transgender people, sex work and drug addiction are among the key factors that make people reluctant to share information and come forward for testing, he said. “Half of all the people infected with HIV do not know it.”

These attitudes also make governments reluctant to adopt policies associated with lower rates of HIV infection – such as decriminalising homosexuality – or to invest in evidence-based prevention strategies, such as clean needle programs and high-quality sex education.

“We need a new commitment from government, a renewal of spirit and effort,” Lord Fowler said. “We need to get [HIV/AIDS] back on the public agenda. That’s what I’m trying to do.”