Probiotics could be a key to cystic fibrosis outcomes

UNSW medical researcher Keith Ooi has received a $1 million grant to lead a major study to see if probiotics can improve the overall health and life expectancy of children with cystic fibrosis. 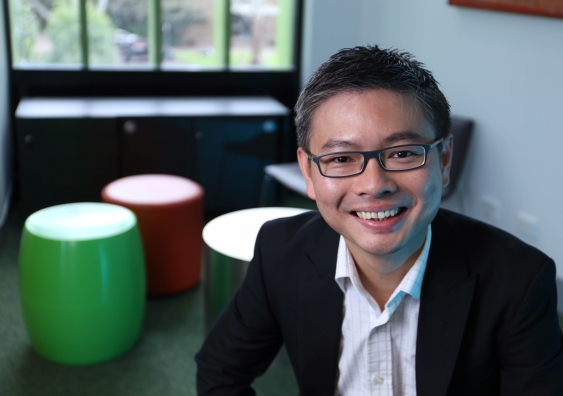 A major study to investigate if probiotics can improve the health and quality of life of babies and children with cystic fibrosis is underway after UNSW childhood medical researcher Dr Keith Ooi received a $1 million Cystic Fibrosis Foundation Clinical Research Award.

Dr Ooi, a paediatric gastroenterologist from the School of Women’s & Children’s Health, will use the grant to lead Australia’s largest randomised control trial of children with CF under six, to examine if a daily probiotic supplement can improve gut bacteria and digestive system function, which is often disrupted in these children by constant antibiotic use. The study will also look at the impact of probiotics on gut symptoms and lung function.

“One of the major issues children with CF face is gut inflammation that leads to an inability to grow and put on weight," says Dr Ooi.

"Our previous work has shown that digestive problems in CF start in very early childhood and its degree of severity is linked with growth outcomes."

The gut microbiome of children with CF is different to that of healthy children, and the discrepancy widens with increasing age. The first few years of life is the ideal time to intervene and try and modify the final adult microbiome.

The Australia and New Zealand study will recruit about 130 children to see if probiotics administered for one year restores gut microbiota and reduces intestinal inflammation. In the study’s second year, researchers will observe the children to determine if any improvements are long-lasting. A combination of about 15 strains of probiotic will be used.

“In healthy children the first few years of life is when the gut bacterial community evolves. Beyond four years old, the gut microbiome - an ecosystem of bacteria, yeasts and fungi - is set for life,” says Dr Ooi.

"Previous studies in CF have shown probiotics can reduce inflammation and improve weight gain but none have been done on this scale, over a two year period or exclusively in young children."

CF is a genetic disease characterized by the build-up of thick, sticky mucus that can damage many of the body's organs. The most common signs and symptoms include progressive damage to the respiratory system and the inability to digest food properly, leading to chronic digestive system problems.

“Big improvements in treatment for lung disease in people with CF means the life expectancy is now about 40 years old. But as adult survivors of CF are living longer they are facing a much higher risk of bowel cancer, significantly higher than the general population," says Dr Ooi.

"The most likely cause is chronic and low-grade gut inflammation that starts early and which eventually catches up and develops into cancer in early adult life. This serious risk is potentially changeable.

“In last few years we’ve had a revolution in treating CF with the development of medicines which treat the underlying genetic defect. We have data to show that by correcting the underlying defect in CF using such a medication, the microbiome and severity of inflammation in the gut also improves," he says.

The drug that is currently approved in Australia only targets about 3 to 5% of the population with CF and treatment costs are high.

“Our hope is that we can modify the natural course of CF disease using a safe and easily accessible intervention such as probiotics," says Dr Ooi.