Young men in the military are three times more likely than those in the general population to have committed a violent offence in their lifetime, new research shows. 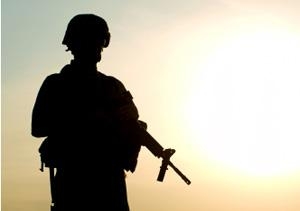 Young men in the military are three times more likely than those in the general population to have committed a violent offence in their lifetime, with the highest risk period being after they return from war, new research shows.

This comes as the majority of Australian troops in Afghanistan prepare to return from the end of this year.

An author of the research forensic psychiatrist Kimberlie Dean has called for work into the potential value of special programs and counselling to reduce the risk of such violence. The paper is being published in a special edition of The Lancet.

The study, conducted in the UK, is the first to use criminal records to explore the impact of deployment, combat and post-deployment mental health problems on violent offending in a large national cohort of military personnel.

The research found the likelihood of violent offending in soldiers was highest during the post-deployment period.

More than one in five men aged under 30 years who had served in the military (20.6 per cent) were violent offenders, compared with 6.7 per cent in the general population.

While there are a number of factors playing into the likelihood of violent offending, the research found two things increased that risk: direct combat and the experience of trauma.

“The risk is not due to deployment itself, but the type of experience you have when you’re deployed,” says Associate Professor Dean, who is Chair of Forensic Mental Health at UNSW.

However, the strongest predictors of offending remain being a young man, being from a disadvantaged socio-economic group and having a history of violent offending prior to joining the military.

“Military personnel are already skewed towards young men of lower socio-economic backgrounds, especially those of lower rank who make up the majority,” says Associate Professor Dean from UNSW Medicine. “So they are already at risk.”

While the research was carried out in the UK, Associate Professor Dean warns there is likely to be a similar risk for Australian personnel.

“While there are not the same numbers of military personnel here as in the UK, the groups are not dissimilar,” she says.

“There may be differences in the way military personnel are treated and supported when they return and that would have an impact. Nonetheless, we could see some of the same problems arise when our troops return.”